Rwanda is a country in Africa. It is near Burundi, Congo-Kinshasa, Uganda, and Tanzania. In the Rwandan genocide of 1994, over one million (1,000,000) people were killed.

During the Scramble for Africa, Belgium conquered Rwanda. The Belgians then began to divide Rwandans into groups: Hutu, and Tutsi. The Belgians picked people that they thought looked more European to be Tutsi. The rest became Hutu. The Belgians told Rwandans that Tutsi were superior to Hutu. They helped Tutsi rule over Hutu using their army.[5]

On July 1, 1962, Rwanda became independent and Hutu were given power. Thus, anti-Tutsi purges occurred frequently. Many Tutsi fled to Uganda, where they formed the Rwandan Patriotic Front, or RPF, which tried to invade Rwanda in 1990.

The genocide against Tutsi

On the night of April 6, 1994, dictator Juvénal Habyarimana's plane was shot down, but it is still not clear who did it. Within half an hour, roadblocks manned by the Interahamwe militia were seen all over the capital, Kigali. The genocide against Tutsi had begun. It lasted for about 100 days, and it left over one million (1,000,000), Tutsi and moderate Hutu dead. The main weapon used was the machete, or umupanga. Other countries paid little attention to the killing. On July 2, 1994, the RPF captured Kigali.[6]

The Kagera and Ruvubu rivers, part of the upper Nile

At 26,338 square kilometres (10,169 sq mi), Rwanda is the world's 149th-largest country. The entire country is at a high altitude. The lowest point is the Rusizi River at 950 metres (3,117 ft) above sea level. Rwanda is in Central/Eastern Africa. It is bordered by the Democratic Republic of the Congo to the west, Uganda to the north, Tanzania to the east, and Burundi to the south. It is a few degrees south of the equator and is landlocked. The capital, Kigali, is near the centre of Rwanda.

The country's longest river is the Nyabarongo. The Nyabarongo-Kagera eventually drains into Lake Victoria. Rwanda has many lakes, the largest being Lake Kivu. It is one of the twenty deepest lakes in the world. Other sizeable lakes include Burera, Ruhondo, Muhazi, Rweru, and Ihema. Ihema is the largest of a string of lakes in the eastern plains of Akagera National Park. 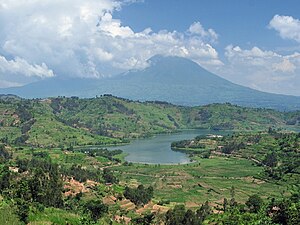 Lake and volcano in the Virunga Mountains

There are many mountains in central and western Rwanda. The highest peaks are found in the Virunga volcano chain in the northwest. This includes Mount Karisimbi, Rwanda's highest point, at 4,507 metres (14,787 ft). The centre of the country is mostly rolling hills. The eastern border area has savanna, plains and swamps.

Rwanda has a temperate tropical highland climate. It has lower temperatures than are typical for equatorial countries. This is because of its high elevation. Kigali, in the centre of the country, has a typical daily temperature range between 12 °C (54 °F) and 27 °C (81 °F). There is little change through the year. There are two rainy seasons in the year. The first runs from February to June and the second from September to December. These are separated by two dry seasons. The major one is from June to September, during which there is often no rain at all. There is a shorter and less severe one from December to February.

In prehistoric times montane forest covered one third of the land of present-day Rwanda. Naturally occurring vegetation is now mostly in the three National parks, with terraced agriculture in the rest of the country. Nyungwe, the largest remaining forest, has 200 species of tree as well as orchids and begonias. Vegetation in the Volcanoes National Park is mostly bamboo and moorland, with small areas of forest. Akagera has a savanna ecosystem. Here there are mostly acacia. There are several rare or endangered plant species in Akagera, including Markhamia lutea and Eulophia guineensis.

The greatest diversity of large mammals is found in the three National Parks. Akagera has typical savanna animals such as giraffes and elephants, while Volcanoes is home to about one third of the worldwide mountain gorilla population. Nyungwe Forest has thirteen primate species including chimpanzees and Colobus monkeys. The Ruwenzori colobus move in groups of up to 400, the largest troop size of any primate in Africa.

There are 670 bird species in Rwanda. There is a difference between the east and the west. Nyungwe Forest, in the west, has 280 recorded species. Species include the Ruwenzori Turaco and Handsome Francolin. Eastern Rwanda, by contrast, has savanna birds such as the Black-headed Gonolek and those who live near swamps and lakes, including storks and cranes.