Slovakia (Slovak: Slovensko) (Official name The Slovak Republic, Slovenská republika) is a country with no access to the ocean in Central Europe. It is bordered by Austria in the southwest, Hungary in the south, Ukraine in the east, Poland in the north and Czech Republic in the northwest. Its capital city is Bratislava, the only capital of the world that borders with other two countries. Other main cities are Košice, Prešov, Žilina, Banská Bystrica, Trenčín, Nitra and Trnava. Slovakia has been a member of the European Union since 2004 and its official currency is the Euro.

The Celts started to settle since 450 BC. The coins named Biatec represent the first use of writing in Slovakia. At the turn of millenniums, many different Germanic tribes like Quadi and Marcomanni started to overtake the area. The Roman Empire established many outposts along the Danube river. They even fought Germanic tribes, with the most northern presence being in Trenčín (Laugaritio), during the Marcomannic Wars.

Great Moravia was at first in constant quarrels with the Eastern Francia, and at the beginning of the 10th century, with the Magyars who arrived from Asia. The Magyars conquered Great Moravia in 906, and established the Hungarian Principality, resulting later in the creation of the Kingdom of Hungary in year 1000. Slovaks continued to live in the north, while most Hungarians were in the south.

A huge population loss resulted from the Mongol invasions in 1241. The Hungarian kings started to invite other settlers, for example Germans in the 13th century, and many others started to arrive in the kingdom, Vlachs from Romania in the 14th century and Jews.

In the 16th century the Ottoman Empire occupied the southern part of the kingdom including the two most important towns, Buda (capital) and Székesfehérvár (coronation capital). Many Hungarian nobles moved to Slovakia and the king moved to Bratislava (Pressburg, Pozsony at that time). The wars against the Ottomans and an uprising against the Habsburgs caused much destruction. After the Ottomans started to retreat back from Hungary, Bratislava continued to be capital until 1848, when it was moved back to Budapest.

The creation of a dual monarchy, Austria-Hungary, enabled the Hungarian government to initiate a policy of suppressing the teaching of languages other than the Hungarian language in state schools. The official use of other languages than Hungarian was also discouraged. During this time, a nationalist movement arose among Slovakians. A part of this movement joined forces with a part of the Czech nationalist movement. During World War I, this movement convinced the future victorious powers to recognise a new state of Czechoslovakia after the war.

The territory of today's Slovakia was a part of Czechoslovakia from 1918 to 1938 and again from 1945 until 1989. Czechoslovakia was one of the states which came into existence after the breakup of Austria-Hungary at end of World War I in 1918. Czechoslovakia split up in 1939, when Slovakia, under Hitler's influence and pressure, declared independence and became an independent state. The state existed during World War II. It was a one-party totalitarian state which was a puppet ally of Nazi Germany. Under the regime, the state fought in the war on the side of Nazi Germany and deported about 70,000 of its Jewish citizens to Nazi extermination camps as part of the Holocaust.

The territory of Czechoslovakia was liberated by the Soviet Union at the end of World War II in 1945. After the liberation, Czechoslovakia was reunified and briefly existed as a democratic country. The Communist Party successfully performed a state coup in 1948 and ruled Czechoslovakia as a totalitarian one-party state which was a satellite of the Soviet Union. In 1989, the one-party rule of the Communist Party was overthrown during the Velvet Revolution, which was a series of large and peaceful demonstrations by the citizens in the streets.

Czechoslovakia again became a democratic country. However, it split up into two independent countries (Slovakia and Czech Republic) on January 1, 1993 in what became known as the Velvet Divorce. Slovakia has been a member of the European Union since May 1, 2004.

Slovakia is landlocked. It is noted primarily for its mountainous nature, with the Carpathian Mountains being in the north and various lowlands mostly in the south. The highest mountain range are the Tatra mountains with the highest peak, the Gerlachov Peak (Slovak: Gerlachovský štít; 2,654 m). Major Slovak rivers besides the Danube are the Váh and Hron.

At low altitudes, Slovakia's climate is humid continental (Dfb in the Koeppen climate classification, with warm summers and cloudy, cold and humid winters. At high altitudes it is subarctic and alpine. 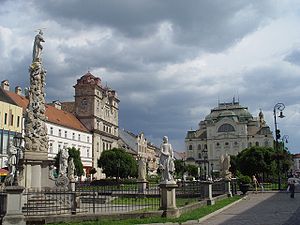 About 5.5 million people live in Slovakia.[6] Most people are Slovak (86%), but in southern regions of Slovakia live Hungarians (10%), with some municipalities even being with the Hungarian majority (for example, Komárno or Dunajská Streda), Ruthenian or Ukrainian are spoken in the northeast. A minority Roma population speak versions of the Romany language and are scattered mainly in the east.

The Slovak constitution guarantees a freedom of religion. The majority of Slovaks are Roman Catholics (69%), the next are the atheists (13%). Other religions include Lutheranism, Greek Orthodox and Calvinism. There are about 5,000 Muslims in Slovakia and 2,000 Jews.

There are currently 8 regions of Slovakia:

These are further divided into many districts. There are currently 79 districts of Slovakia.