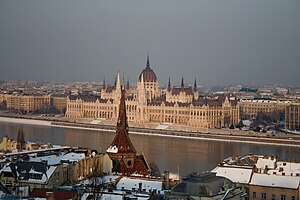 Aerial view with the Parliament in the foreground

Budapest is the capital and the largest city of Hungary. It was made as such in 1873. In that year three towns on the River Danube, namely Buda, Óbuda (Old Buda) and Pest were united. The city has a population of about 1.7 million people. Its highest place is János Hill (527 m.).

The history of the city started with Celtic tribes who settled here before 1 AD. Later Roman empire transformed the first settlements into the Roman town of Aquincum. The Hungarians arrived in the territory of modern Hungary only in the end of 9th century AD.

The main sights in Budapest are the Castle Hill (Várhegy), the Parliament House (Országház) and St. Stephen's Basilica. Budapest is also known for the ruins of Aquincum, the capital city of the Roman Province of Pannonia. The city has a great atmosphere with nice cafes, spas and the traditional Hungarian hospitality.

It has the oldest subway-line in Europe.[4]

Budapest has a humid subtropical climate with relatively cold winters and quite warm summers.[5] 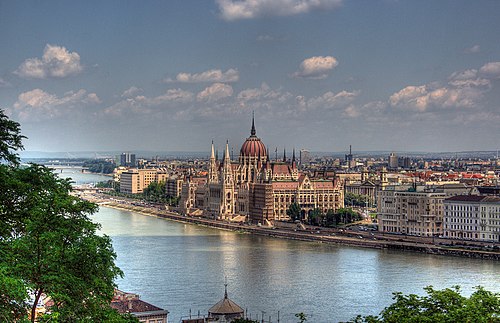 Parliament. That side of the Danube the city is called Pest, which is pronounced as 'Pesht'