Tehran (or Teheran, Persian: تهران), is the capital of Iran and the center of Tehran Province. The origin of the name Tehran is unknown. The word Tehran means warm mountain slope. Tehran is at the foot of the Alborz mountain range.

Tehran is the 32nd National Capital of Iran. It is the largest city in the Middle East & Western Asia. It is the 16th most populated city in the world. It has about 8 million people. Tehran has 4 counties: Tehran, Shemiranat, Rey & Islamshahr. Tehran has a large network of highways.

Tehran was well known as a village in the 9th century, but was less well-known than the city of Rhages (Ray). Tehran today, replaces Ray, the ancient capital of Iran destroyed by the Mongols in 1220 A.D., the ruins of which can be seen 6 km south of Tehran. In 1869/70 A.D., Tehran acquired considerable prestige and was enclosed in an 8 km rampart which had 12 gates.

During the Safavid period, Shah Safi created a military base in Tehran, and had two great towers erected therein, which became known as Ghaleh Meydan and Ghaleh Hessa. Karim Khan Zand lived in Tehran. for 4 years. In the early 18th century, Karim Khan Zand, ordered a palace, and a government office to be built in Tehran. Later he moved his government capital to Shiraz.

Tehran became the capital of Iran, in 1795, when Agha Mohammad Khan, became King. It is still the capital. During the reign of Agha Mohammad khan, the government headquarters were built north of Emam_zade Zayd. Agha Mohammad Khan became King of Iran in Khalvat Karimkhani Palace in Tehran. During the reign of Fath Ali Shah, the soltani mosque, the Abbas_abad bazaar, and the Ilchi garden (the site of today`s Russian embassy) were added. Nasser_e_din_Shah changed the palace from center of Tehran to Sadabad. He changed the view of Tehran from a town to a modern capital.

In the Russia Embassy in Iran, the Tehran Conference was held. The Tehran Conference (codenamed Eureka) was the meeting of Joseph Stalin, Franklin D. Roosevelt and Winston Churchill between November 28 and December 1, 1943. Most of it was held at the Soviet Embassy in Tehran, Iran. It was the first World War II conference amongst the Big Three (the Soviet Union, the United States, and the United Kingdom) where Stalin was present. The aim of the Tehran conference was to plan the final strategy for the war against Nazi Germany and its allies. The discussion was mostly about the opening of a second front in Western Europe.

During 1980–88, Tehran was attacked by scud missiles and air strikes. After the Islamic Revolution in Iran and during war between Iran and Iraq, many people left Tehran. In recent years, many professional people who lived in Tehran, left Iran for freedom and a better life in other countries. Traffic, crime, drugs and lack of freedom in Tehran, are most important reasons. 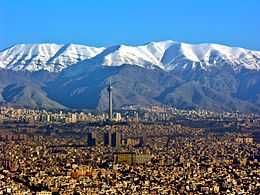 Tehran is the center of most Iranian industries and services. Modern industries of this city include the making of automobiles, electronics, weaponry, textiles, sugar, cement, and chemicals. Tehran is also a leading center for the sale of carpets and furniture.

Tehran has a semi-arid (steppe) climate (BSh in the Köppen climate classification). Summers are hot and dry; winters are cold with moderate precipitation, which also falls as snow. Spring and autumn are mild with moderate rainfall. The highest recorded temperature is 43 °C (109 °F) and the record low is −20 °C (−4 °F).

In this vast city, many historic sites can be admired, the most famous of which are the palaces of Sadabad, Niavaran, Sahebqaranyyeh and Golestan, the mosque of Seyyed Azizollah, the great Bazar of Tehran and many museums, such as Reza Abbasi museum, the carpet museum of Iran, Abguineh (glass and ceramics) museum, the Azadi museum, etc. Tehran has 740 parks.

Leisure and sport resorts around Tehran include Abali, Dizin, Gajereh and Shemshak ski stations, the dam water ski station and the slopes of Darband and Shemiran.