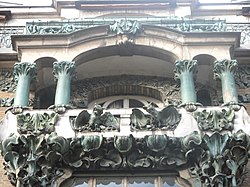 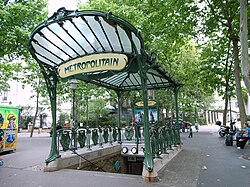 Art Nouveau [1] is an international art movement and style based on organic forms. It was seen in modern art, graphic design, architecture and applied arts such as decoration, jewellery, ceramics and glass.[2]p7 It peaked in popularity at the fin de siècle of the late 19th century (1890–1905), and continued until the First World War.[3]

A reaction to academic art of the 19th century, Art Nouveau is organic in style. It has floral and plant-inspired motifs, and stylized, flowing curvilinear forms.[2]p3-36 Art Nouveau is an approach to design according to which artists should work on everything from architecture to furniture, making art part of everyday life.[4]

The movement was strongly influenced by Czech artist Alphonse Mucha. Mucha produced a lithographed poster as an advertisement for the play Gismonda by Victorien Sardou, starring Sarah Bernhardt. The poster appeared on 1 January 1895 in the streets of Paris.[5] It was an overnight sensation, and announced the new artistic style and its creator to the citizens of Paris. Initially called the Style Mucha, this soon became known as Art Nouveau.[6]

Art Nouveau's fifteen-year life was most strongly felt throughout Europe—from Glasgow to Moscow to Madrid—but its influence was global.[2] In France, Hector Guimard's Paris Metro entrances shaped the landscape of Paris and Emile Gallé was at the center of the school of thought in Nancy. Victor Horta had a decisive impact on architecture in Belgium.[2]p37

Magazines like Jugend helped spread the style in Germany, especially as a graphic design form, while the Vienna Secessionists influenced art and architecture throughout Austria-Hungary. Art Nouveau was also a movement of distinct individuals such as Gustav Klimt, Charles Rennie Mackintosh, Alphonse Mucha, René Lalique, Antoni Gaudí and Louis Comfort Tiffany, each of whom interpreted it in their own individual manner.[2]p34[7]

Although Art Nouveau fell out of favour with the arrival of 20th-century modernist styles,[8] it is seen today as an important bridge between Neoclassicism and modernism.[7]

Art Nouveau monuments are now recognized by UNESCO on their World Heritage Sites list as significant contributions to cultural heritage.[9] The historic center of Riga, Latvia, with "the finest collection of art nouveau buildings in Europe", was inscribed on the list in 1997 in part because of the "quality and the quantity of its Art Nouveau/Jugendstil architecture".[10] Four Brussels town houses by Victor Horta were included in 2000 as "works of human creative genius" that are "outstanding examples of Art Nouveau architecture brilliantly illustrating the transition from the 19th to the 20th century in art, thought, and society".[11]