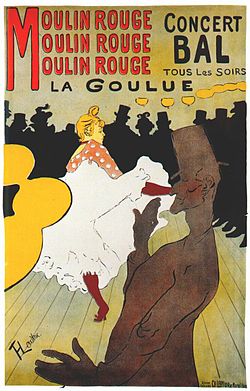 Lithography (from Greek λίθος - lithos, 'stone' + γράφω - graphο, 'to write') is a method for printing using a stone (lithographic limestone) or a metal (steel or aluminium) plate with a completely smooth surface.

Lithography was invented in 1796 by Bavarian author Alois Senefelder as a low-cost method of publishing theatrical works.[1][2] Lithography can be used to print text or artwork onto paper or other suitable material.

Lithography originally used an image drawn in wax or other oily substance applied to a lithographic stone as the medium to transfer ink to the printed sheet. In modern times, the image is often made of polymer applied to a flexible aluminium plate.

The flat surface of the plate or stone is slightly roughened, or etched, and divided into hydrophilic (= water-loving) regions that accept a film of water and repel the greasy ink, and hydrophobic regions which repel water and accept ink. The image may be printed directly from the stone or plate (in which case it is reversed from the original image) or may be offset by transfer to a flexible sheet, usually rubber, for transfer to the printed article.

This process is different from gravure or intaglio printing where a plate is engraved, etched or stippled to make cavities to contain the printing ink, and in woodblock printing and letterpress where ink is applied to the raised surfaces of letters or images.

In the early days of lithography, a smooth piece of limestone was used (hence the name "lithography"—"lithos" (λιθος) is the ancient Greek word for stone). After the oil-based image was put on the surface, a solution of gum arabic in water was applied, the gum sticking only to the non-oily surface. During printing, water adhered to the gum arabic surfaces and avoided the oily parts, while the oily ink used for printing did the opposite.

Chromolithography (colour lithography) was invented by Engelmann and son, who were granted a patent in 1837.[3] After that, it was a matter of time before it reached full commercial development.

By using more than one stone, different colours can be added to the same picture. Each colour needs a separate stone. The great posters of such artists as Alphonse Mucha and Toulouse-Lautrec are made like this. Complicated graphics may need twenty or more stones.[4]