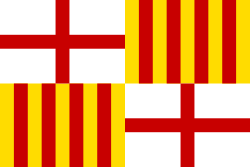 In 1992, Barcelona hosted the Summer Olympic Games. Many new parks were opened and other significant changes to the city were made. One example is opening the new beaches in the Poble Nou area.

Barcelona is one of the most important tourist destinations in Europe, with millions of people visiting every year. The city is famous for its 19th century modernist architecture. The best known of those buildings was designed by Antoni Gaudi. It is the unfinished church Sagrada Familia,[1] which is the symbol of Barcelona.

It is known for its tapas food, a meze.

Barcelona has sister relationships with many places worldwide: