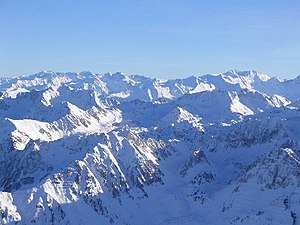 Central Pyrenees, as seen from the summit of the Pic du Midi de Bigorre 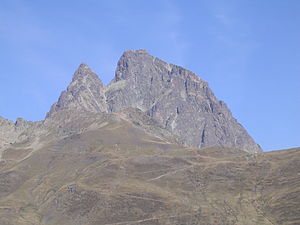 The Pyrenees (Catalan: Pirineus; French: Pyrénées; Spanish: Pirineos; Occitan: Pirenèus; Aragonese: Perinés; Basque: Pirinioak) are a range of mountains in southwest Europe that form a natural border between France and Spain. They separate the Iberian Peninsula from France, and extend for about 430 km (267 mi) from the Atlantic Ocean (Bay of Biscay) to the Mediterranean Sea (Cap de Creus).