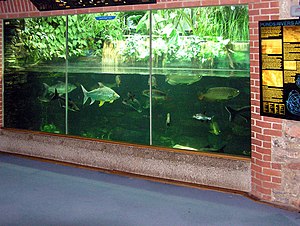 An aquarium in Bristol, England

An aquarium (plural aquariums or aquaria) is a place where fish and other animals that live in water are kept by humans. An aquarium can be a small tank, or a large building with one or more large tanks.

Keeping an aquarium is a popular hobby around the world. Careful aquarists (people who keeps aquariums) make sure their fish live in an environment similar to their natural habitats. This means caring about water quality, lighting, and food.

Large public aquariums are often popular with tourists. They show the fish and other animals they keep in large tanks, and also often protect species that are close to extinction. An example of a public aquarium is Sydney Aquarium, Sydney, New South Wales, Australia.