i/kroʊˈeɪʃə/ kroh-AY-shə) is a unitary democratic parliamentary republic in Europe at the crossroads of Central Europe, and Southern Europe, being influenced by powers from both regions at varying points in its history. Its capital and largest city is Zagreb. It was one of the republics of the Socialist Federal Republic of Yugoslavia. It became independent in 1991. It joined the European Union on 1 July 2013.

In earlier times, the land now known as Croatia was inhabited by different kinds of humans including Neanderthals and Neolithic cultures. In Roman times, seafaring pirates known to the Romans as the Dalmatian Tribes lived there, as the Histri, Liburni and the Delmatae. The Romans conquered and annexed the territory in 9 AD, calling it the province of "Dalmatia," named after these tribes. During more than 400 years of Roman rule, the province of Dalmatia would become Romanized. The Roman invaders mixed with the natives and their descendants adopted a Roman lifestyle even after the collapse of the Roman state in 476 AD.

In the early seventh century AD, pagan West Slavs named the Croats (where Croatia gets its name) came to live in the former province of Dalmatia when they conquered the people already living there. However, they would soon be influenced by Roman Catholic Christian missionaries who completed the process of Christianization in the early 9th century. From the time of the crowning of Tomislav in 925 as the first King of Croatia, Croatia would become its own independent Catholic kingdom until 1102, when a Hungarian prince inherited the Croatian throne. The Hungarians would rule as Kings of Croatia until the early modern period, when the last Hungarian king of Croatia Louis II was killed at the Battle of Mohacs in 1526 and the kingdom chose the Austrian Archduke Ferdinand as king the next year.

Croatia would remain as a part of the empire of Austria-Hungary under Ferdinand's descendants until 1918. In 1918 it became a part of Kingdom of Slovenians, Croats and Serbs, later named Yugoslavia which was occupied in World War II. After a short war with Italy a fascist dictatorship formed the Independent State of Croatia in 1941, but it was not independent from the control of Nazi Germany (see also Jasenovac concentration camp).

In 1945, Croatia became a part of new Yugoslavia (Socialist Federal Republic of Yugoslavia) which was non-aligned after breaking connections with Eastern Bloc. It collapsed in 1991 as initially Slovenia, than Croatia, later other republics claimed independence and became parliamentary democracies. War with Yugoslavia made a strong impact on society in economic, political and cultural terms. Civil society and media that came out of anti-war struggle in Croatia grew against nationalism, media and civil freedoms, later also corruption.

The country's democratic development around 2000, made it possible for Croatia to finally join Slovenia as only the second republic to become the European Union member on 1 July 2013.[4] 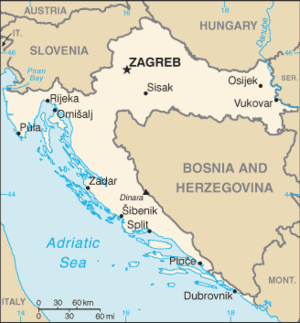 A map of Croatia

Croatia is in Central and Southeast Europe, bordering Hungary to the northeast, Serbia to the east, Bosnia and Herzegovina to the south-east, Montenegro to the south-east, the Adriatic Sea to the south-west and Slovenia to the northwest. It lies mostly between latitudes 42° and 47° N and longitudes 13° and 20° E. Part of the territory in the extreme south surrounding Dubrovnik is a practical exclave connected to the rest of the mainland by territorial waters, but separated on land by a short coastline strip belonging to Bosnia and Herzegovina around Neum.[5] Croatia is divided into 21 counties.

Croatia is the 127th largest country in the world.[6] The highest point is the Dinara peak at 1,831 metres (6,007 feet). Thousands of islands are part of Croatia. 48 have people living there year-round. The largest islands are Cres and Krk.[6] Major rivers are the Sava, Drava, Kupa and Danube.

Most of Croatia has a moderately warm and rainy continental climate. Average temperature ranges between −3 °C (27 °F) (in January) and 18 °C (64 °F) (in July). The coldest parts of the country are Lika and Gorski Kotar. The warmest are at the Adriatic coast.

There are several ecoregions in Croatia. The coastline, forests, mountains, and rivers give Croatia diverse flora and fauna. There are more than a thousand endemic species.

Croatia is home to the only known aquatic cave vertebrate—the olm.

There are 444 protected areas of Croatia. Those include eight national parks, two strict reserves, and ten nature parks. The oldest national park in Croatia is the Plitvice Lakes National Park, a UNESCO World Heritage Site.

Croatia adopted its constitution in 1990.[7] It declared independence from Yugoslavia on 8 October 1991.

Salt mine in Ston

Croatia is one of the richest countries of the Balkan Peninsula and of the former Yugoslavia's countries. But Croatia had also the highest cost prices of the whole Central Europe. The average monthly salary/wages in Croatia standing on 739 euro or nearly US$1000.[9]

The retirement age for men is 65 years and for women 60 years.[10] The health care enjoys relative strong protection for the country's inhabitants.

Education is free and required until the child reaches the age of 15. Many choose to continue their studies in high school until the age of 18.[11]

After the war that devastated the country, Croatia has rebuilt its infrastructure, revitalizing its image as a Mediterranean country with crystal clear waters, medieval cities that mix western and eastern architecture, respect for the environment and traditions with the arrival of tourism. Dubrovnik has become the most characteristic symbol of this new Croatia that is strongly committed to European tourism. It is developing a type of tourism based on sustainability, in which culture, gastronomy and nature coexist with the visitor, offering them the experience of discovering Croatia as part of it.

There are many reasons to visit Croatia. Its six UNESCO World Heritage sites : Dubrovnik's Old Town (undoubtedly one of the most beautiful cities in Europe), the Diocletian's Palace in Split, the historic core of Trogir, the Cathedral of St. James of Sibenik, the Plitvice Lakes National Park, or the Episcopal Ensemble of the Euphrasian Basilica in the Historic Center of Porec (Istria) .

Nature is another attractive source of tourism in Croatia. Its eight National Parks and ten Natural Parks with their varied fauna and flora show all their splendor, with a coastline that winds from the Istria Peninsula to the south of Dalmatia, leaving beautiful coves, beaches, and cliffs. The islands, such as Hvar or Korcula, in Dalmatia or Rab and Losinj in Kvarner Bay, which are sometimes grouped together in archipelagos as interesting as those of Brijuni or Kornati, they host millions of tourists who seek peace or the possibility of practicing nudism, so associated with Croatia, in its crystalline waters. More than a thousand islands and islets that make up the Adriatic Coast, a paradise for those who love sailing and seek to cross the Adriatic by Sailboat .

The variety of the tourist offer in Croatia goes beyond the beautiful cities Dubrovnik, Zagreb or Split.