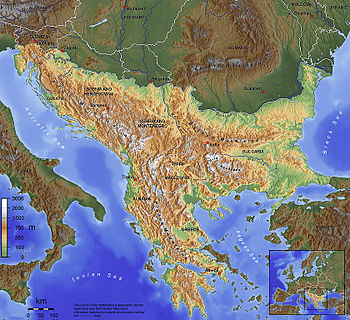 Current political map of the Balkans.

The Balkans is the historic and geographic area, a peninsula in southeastern Europe. The region has a combined area of 550,000 km² and an approximate population of 55 million people.[1] The region takes its name from the Balkan Mountains which run through the centre of Bulgaria into eastern Serbia.

The Balkans are connected by water on three sides: the Black Sea to the east and branches of the Mediterranean Sea to the south and west (including the Adriatic, Ionian, Aegean and Marmara seas).

The identity of the Balkans is dominated by its geography; historically the area was known as a crossroads of several cultures. It has been a meeting point between the Latin and Greek parts of the Roman Empire. It became an area where Orthodox and Catholic Christianity met, as well as the meeting point between Islam and Christianity. Many Jewish people fled here from Inquisition.Austria (see also Austria-Hungary, Assassination in Sarajevo)

Population composition by nationality and religion

Ethnic map of the Balkans prior to the First Balkan War.

The region's principal nationalities include:

The region's principal religions are (Eastern Orthodox, Catholic), and Christianity. A variety of different traditions of each faith are practiced, with each of the Eastern Orthodox countries having its own national church with its own patriarch.