KidzSearch Safe Wikipedia for Kids.
Jump to: navigation, search
Lua error in Module:Autotaxobox at line 156: attempt to index a nil value.Lua error in package.lua at line 80: module 'Module:Taxonbar/exists' not found. 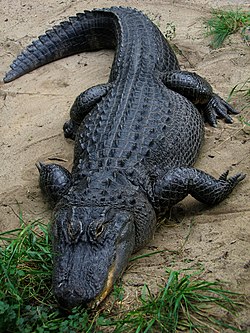 A vertebrate is an animal with a spinal cord surrounded by cartilage or bone. The word comes from vertebrae, the bones that make up the spine. Animals that are not vertebrates are called invertebrates. Vertebrates include birds, fish, amphibians, reptiles, and mammals. The parts of the vertebrate skeleton are:

Examples of vertebrates are mammals, birds, and fish. A few tens of thousands of species have been identified. The term "fish" is used to describe at least four different kinds of vertebrates.

Vertebrates dominate amongst the animals in virtually all environments. They include the largest animals in each main ecosystem, though not the largest living things (because that would include trees). They are the only animals which have an adaptive immune system.[3] These two facts may be connected.