KidzSearch Safe Wikipedia for Kids.
Jump to: navigation, search
For the network of nerves inside the spine, see Spinal cord.

The vertebral column as seen from the side

A typical thoracic vertebra viewed from above. The unlabeled hole in the middle will form the Spinal canal 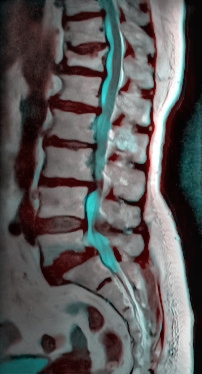 An MRI of the human spine. The part in blue is the spinal canal. It also shows that one vertebra has been broken (L-3), which means that the spinal cord is compressed at one point (L-3,L-4 impingement) .

The vertebral column has five regions. These regions from top to bottom are: