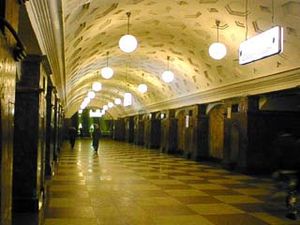 A metro station in Moscow

A Rapid transit system (also called a Metropolitan), subway, underground, tube, elevated, or heavy rail system) is a railway system. Usually it is in a city or urban area. Trains run very often, and carry many passengers. Usually it lacks level crossings. Rather, grade separation keeps it separate from other traffic. Grade separation is when two streams of traffic go over and under each other, so they do not meet.

In England a subway is called an Underground, in Scotland and North America it is called Subway, in Germany and Austria U-Bahn and in the rest of the world usually Metro, for example: Barcelona Metro.

The first subway in North America was the subway in Boston. Building started in 1895 and the first section was opened in 1897.