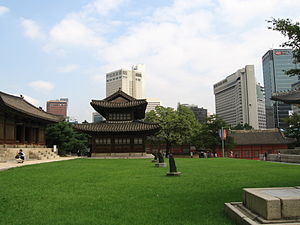 Old and new buildings in the downtown of Seoul 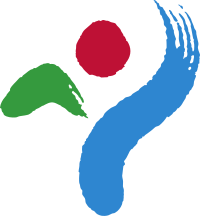 Seoul is in the middle of the Korean Peninsula. Han River (한강 Han-gang) is a major river in South Korea and the fourth longest river on the Korean peninsula. This river goes across Central Seoul.

Seoul is thought to be the capital of Baekje Kingdom (백제) from 18 BC. At that time, the name of the city was Wiryeseong (Korean: 위례성Lua error in package.lua at line 80: module 'Module:Category handler/data' not found.). Wiryeseong is thought to be Songpa-gu, Seoul. During Silla Period (신라시대), Hanju (한주) was name of Seoul. During Goryeo Period (고려시대), the name of Seoul was Namgyeong (남경) which means "the south capital". There was a palace of Goryeo Dynasty. Hanyang was name of Seoul in late Goryeo Period. After establishment of Joseon Dynasty, the name of Seoul was Hanseong (한성) and Hanseong became the capital of Joseon Kingdom. From 1910 to 1945 when Korea was under Japanese rule, the name of Seoul was Gyeongseong (경성). Since South Korea was started in 1948, it has been the capital, except for a short time during the Korean War. Seoul became a special city in 1948. April 19th Revolution (4.19혁명) and June Revolution (6월 민주항쟁) was took place in Seoul.

The most famous soccer team in Seoul is FC Seoul. Their stadium is Sang-am World cup Stadium. It can seat 66,806 people.

Seoul has three famous baseball teams that all play as part of the Korea Baseball Organization. One is The Doosan Bears and they have many famous players. The LG Twins won the Korean Series in 1990 and 1994. Both of these teams play at Jamsil Stadium. Lastly The Nexen heroes who use Mokdong stadium .

Seoul has many stadiums such as Olympic stadium, Jamsil Stadium, Sang-am World Cup Stadium, and Mokdong Stadium. Olympic Stadium was built in 1988 for the Olympics. It was used for the opening and closing ceremonies. World Cup stadium was used for several games in the 2002 FIFA World Cup.

Today, Korean is the official language in Seoul and is spoken in both North and South Korea. Hangul is the alphabet for the written language. Hangul(한글,Korean) was made by Sejong the Great in 1443. Hangul has 19 consonants and 21 vowels and was said to be a scientific language patterned on the vocal organs. Hangul replaced the Hanja, or Chinese characters, which were used before and are still occasionally used.