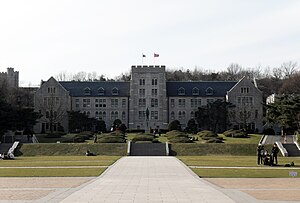 Korea University is a private university in Seoul, South Korea. Along with Seoul National University and Yonsei University, KU is one of the three most renowned universities in the country, collectively known as 'SKY.'

Founded in 1905 with the struggle against Japanese colonialism as a historical background, Korea University holds its legacy with highly national values as priorities. These days, however, an emphasis on internationalism and globalization is also becoming an important value that KU pursues.

Korea University has 81 academic departments, and is most well known for its law school, business school, and college of education. It has many notable alumni, including the former President of the Republic of Korea Lee Myung-bak and former mayor of Seoul Oh Se-hoon. Cha Bum-Kun, famous football manager and former player (nicknamed Tscha Bum), graduated from KU. In 2009, famous figure skater Kim Yu-Na entered Korea University as a physical education major. About 28,000 students are currently studying in Korea University, including 1,000 foreign students.