Taipei City (Chinese: 臺北市) is the capital city of the Republic of China, known by most people simply as Taiwan. It is the largest city in Taiwan. It has a humid subtropical climate (Cfa in the Köppen climate classification). Its population in 2014 was about 2.7 million people.[6] Its mayor is Ko Wen-je. 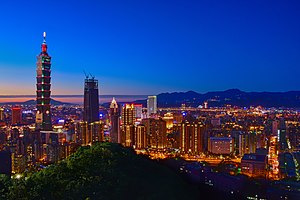 In 1626, Spanish people took over and started to spread their religion. The Dutch moved out Spanish and took over their fortresses than the Dutch started their trading business. In 1661 Koxinga came to Taiwan and expel the Dutch. And he started to reclaim Taiwan, used a system called Tuntian (a state-promoted method of agriculture), it successfully help Taipei to grow more food.[9] Taipei officially became part of the Tianxing county of China.[10]

In 1683 Taiwan got marked as part of the Qing Dynasty. Therefore, a lot of Chinese moved into Taipei,[11] so there were many villages and streets formed, like the Mengjia, Shilin Street, Xikou Street and Dadaocheng. Dadaocheng is a place that produces tea, it has an important impact on how Taipei became prosperous. It was the biggest external trade port that . Foreign countries started to set their business stores in Taipei.

Taipei City is divided into 12 districts. Among the notable one is Tamsui.

When compared to other Asian cities, Taipei has "excellent" capabilities for managing air quality in the city.[12] Its rainy climate, location near the coast, and strong environmental regulations have prevented air pollution from becoming a substantial health issue, at least compared to cities in southeast Asia and industrial China. However, smog is extremely common and there is poor visibility throughout the city after rain-less days.

Motor vehicle engine exhaust, particularly from motor scooters, is a source of air pollution in Taipei. There are higher levels of fine particulate matter and polycyclic aromatic hydrocarbons in the mornings because of less air movement; sunlight reduces some pollution.[13]