The territory the Republic of China (ROC) controls is known by most people as the island[16] of Taiwan. Most places on Taiwan Island are called "Taiwan Province" by the government of the Republic of China for official business, except the two largest cities of Taipei and Kaohsiung. West of Taiwan Island, there are three small groups of islands that also belong to ROC. They are: 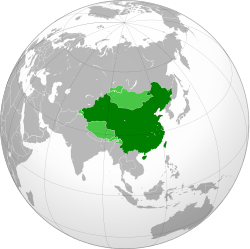 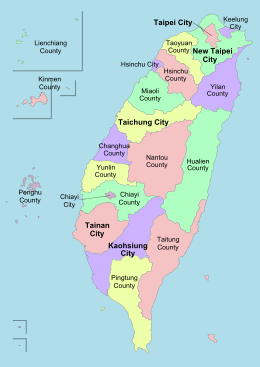 There are administrative divisions in different levels and types.

The Nationalists, led by Dr. Sun Yat-sen, got rid of the Qing Dynasty ruled by the Manchus, then they established the ROC and ended Imperial Dynastic Rule in late-1911. The ROC at that time had Mainland China and all of what is now called Mongolia.

After the Japanese were defeated by the Allies during World War II, Taiwan was controlled by the ROC.

In 1949, the Chinese Communists fought a war against the Nationalists and won. They established the People's Republic of China. The Nationalists left mainland China and arrived in Taiwan.

After the ROC created a base on Taiwan, it hoped one day to capture the Mainland. But Chinese Communists grew stronger, so the Nationalists never did go back. The Communists say they replaced the ROC as the only government of China and also calls Taiwan their own.

Most Taiwanese people speak the Standard Chinese language known as Mandarin, and others speak local dialects such as Min Nan (Taiwanese) or Hakka. The Cantonese language, spoken in parts of southern China (for example, the province of Guangdong, Hong Kong and Macau), is not spoken in Taiwan. A small percentage of Aboriginal Taiwanese speak aboriginal languages, but the rest of the Chinese people have treated them badly, and many of these people, and their languages, struggle to survive. Some older Taiwanese people who went to school while the country was under Japanese rule can speak Japanese.

After the Nationalist government fled the Mainland in 1948-49, they brought their language, Mandarin, with them, and made Mandarin the only official language. Then everyone in the ROC had to learn Mandarin. But, unlike the people in Mainland China, the Taiwanese never changed to simplified Chinese characters and so they have always used traditional Chinese characters. In the past, students were not allowed to speak their mother tongue in school and were expected to speak only Mandarin. Taiwanese, Hakka, and native languages were considered bad until the early 1990s, when education in these languages began to be taught in some school systems. They were promoted, but by this time, many young people could speak only Mandarin.