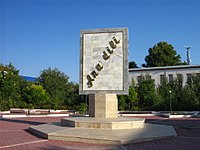 The monument for the Mother (Azerbaijani) tongue in Nakhchivan, Azerbaijan

"First language" sometimes does not mean this, however.