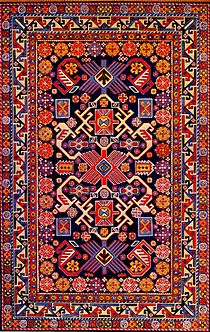 Azerbaijan (Azerbaijani: Azərbaycan; officially called the Republic of Azerbaijan) is a country in the South Caucasus region of Eurasia. It is next to Russia in the north, Georgia, Armenia in the west, Iran in the south, and Caspian Sea on the east. Its capital city is Baku. Azerbaijan became independent from the Soviet Union when it collapsed in 1991.

Azerbaijan also includes the Nakhchivan Autonomous Republic, an enclave, which is next to Armenia to the north and east, Iran to the south and west, and Turkey to the northwest.

Azerbaijan's land is in Eurasia. It is called an Eurasian country by the United Nations. Because Azerbaijan is close to Europe and its history is related to Europe, Azerbaijan is a member of a number of European groups, including the Council of Europe since 2001. Azerbaijan has diplomatic relations with 158 countries. They have membership in 38 international organizations.[6] On May 9, 2006 Azerbaijan was elected to membership in the newly made Human Rights Council by the United Nations General Assembly.[7]

More than 90% of the people are ethnic Azerbaijanis. Minorities include Russians, Georgians and other minorities. The Constitution of Azerbaijan does not say there is an official religion. But, Shia Islam, is by far the largest religion in the country, followed by Sunni Islam. There are also a small number of Christians (mainly Eastern Orthodox), Jews (mainly Ashkenazi), agnostics and atheists.

After the Arab conquest in the 7th century the country has been always under Muslim influence, when its people became Muslim, until the Russian Empire entered the Caucasus region.

From 1920 to 1991, Azerbaijan was a Communist country as a member of the Soviet Union.

Since the early 19th century many Russians settled in Azerbaijan, but after the end of the Soviet Union with the independence of Azerbaijan which is back in control, most Russians and other minorities have left the country and are continuing to leave the country.

There are 106 species of mammals, 97 species of fish, 363 species of birds, 10 species of amphibians and 52 species of reptiles which have been recorded and classified in Azerbaijan.[13] The national animal of Azerbaijan is the Karabakh horse. It is a mountain-steppe racing and riding horse native to Azerbaijan. It is one of the oldest breeds, with ancestry dating to the ancient world. However today the horse is an endangered species.[14]

Azerbaijan's flora is more than 4,500 species of higher plants. Due the unique climate in Azerbaijan, the flora is much richer in the number of species than the flora of the other countries of the South Caucasus.[15] About 67 percent of the species growing in the whole Caucasus can be in Azerbaijan.

Many Azerbaijanis have some form of higher education, most notably in scientific and technical subjects.[16] According to Soviet data, 100 percent of males and females (ages nine to forty-nine) were literate (able to read) in 1970.[16] In 2009, the literacy rate in Azerbaijan was 99.5 percent.[17]

The culture of Azerbaijan has come about as a result of many influences. Today, Western influences, including globalized consumer culture, are strong. National traditions are well kept in the country. Some of the main parts of the Azerbaijani culture are: music, literature, folk dances and art, cuisine, architecture, and movies.

Music of Azerbaijan builds on folk traditions that goes back nearly a thousand years.[18] Among national musical instruments there are 14 string instruments, eight percussion instruments and six wind instruments.[19]

Mugham, meykhana and Ashiq are some of the many musical traditions of Azerbaijan. Mugham is music with poetry and instrumental interludes. When performing Mugham, the singers have to bring their emotions into singing and music. Mugham singer Alim Qasimov is one of the five best singers of all time.[20] Meykhana is a song with no music. It is usually done by several people. They make up the words about a particular subject. Ashiq joins poetry, storytelling, dance and vocal and instrumental music. It is as a symbol of Azerbaijani culture.

There are dozens of Azerbaijani folk dances. They are performed at formal festivals. The dancers wear national clothes like the Chokha. Most dances have a very fast rhythm.

Azerbaijani architecture typically joins East and West.[23] Many ancient treasures such as the Maiden Tower and Palace of the Shirvanshahs in the Walled City of Baku survive in modern Azerbaijan. Plans have been shown for the building of the Azerbaijan Tower. It will reportedly replace the Burj Khalifa as the tallest building in the world. The planned height is 1,050 metres (3,440 ft).[24]

The movie industry in Azerbaijan dates back to 1898. In fact, Azerbaijan was among the first countries involved in making movies.[25] In 1991, after Azerbaijan gained its freedom from the Soviet Union, the first Baku International Film Festival East-West was held in Baku.

The traditional food is famous for many vegetables and greens used seasonally in the dishes. Fresh herbs, including mint, cilantro (coriander), dill, basil, parsley, tarragon, leeks, chives, thyme, marjoram, green onion, and watercress, are very popular. They are often served with main dishes on the table. National dishes show the variety of the landscape. They are based on fish from the Caspian Sea, local meat (mainly mutton and beef), and the many seasonal vegetables and greens. Saffron-rice plov is the flagship food in Azerbaijan and black tea is the national beverage.[26]

The earliest known person in Azerbaijani literature was Hasanoghlu or Pur Hasan Asfaraini. He made a divan of Persian and Turkic ghazals.[27][28] Classical literature in Azerbaijani was formed in 14th century. Among the poets of this period were Gazi Burhanaddin and Haqiqi. The famed Book of Dede Korkut has two manuscripts copied in the 16th century.[29] It is a collection of 12 stories showing the oral tradition of Oghuz nomads.[30]

In the span of the 17th century and 18th century, Fizuli's unique types as well Ashik poetry were taken up by poets and writers such as Qovsi of Tabriz and Shah Abbas Sani.

The first newspaper in Azerbaijani, Akinchi was published in 1875.

Sport in Azerbaijan is very old. Even now, both traditional and modern sports are still practiced. Freestyle wrestling has been traditionally said to be Azerbaijan's national sport. The most popular sports in Azerbaijan are football and chess. The national football team does not do well in international competitions. On March 19, 2010, Azerbaijan won the bid to host the 2012 FIFA U-17 Women's World Cup.[31]

Backgammon plays a major role in Azerbaijani culture.[32] This game is very popular in Azerbaijan and is widely played by the local public.[33]

About 3 million Azerbaijanis, many of them guest workers, live in Russia.[36]

The biggest reason for death in 2005 was from respiratory diseases.[37]

Note: The cities under the direct authority of the republic in italics. 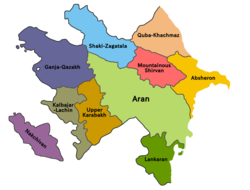 The economy of Azerbaijan is based on industry, agriculture, and on services including tourism. The energy sector based on the large reserves of crude oil and natural gas, is the main source of economic growth in Azerbaijan today, though half of the Azerbaijani people earn their income directly or indirectly through services and a third earn their income through agriculture.[40] The energy boom has led to massive foreign direct investment and the growth rate of the Azerbaijani economy is one of the world's highest.[41]

After gaining independence in 1991 with the end of the Soviet Union, Azerbaijan made the long and difficult change from a command economy to a market economy. The government has largely completed privatization of agricultural lands and small, medium and large state-owned companies. Azerbaijan is continuing making economic reforms, and old economic ties and structures have been slowly replaced. With independence, Azerbaijan became a member of the International Monetary Fund, the World Bank, the European Bank for Reconstruction and Development, the Islamic Development Bank and the Asian Development Bank. Azerbaijan's currency is the Azerbaijani manat (AZN) which is divided into 100 qəpik. It became the national currency in 1992 and replaced the old Soviet ruble. The Central Bank of Azerbaijan was created in 1992. The Central Bank serves as Azerbaijan's central bank, and is responsible for printing and distributing the national currency, the Azerbaijani manat, and to control all commercial banks.[42]