KidzSearch Safe Wikipedia for Kids.
Jump to: navigation, search
This page is about the Caucasian country. For the U.S. state, see Georgia (U.S. state). For other meanings of "Georgia", see Georgia.

Georgia is a Eurasian country in Caucasia. It is on the coast of the Black Sea. During 1918-1921, and 1991-1995 its full name was the Republic of Georgia. Since 1995 it is Georgia as written in the Constitution. It was part of the Soviet Union between 1921-1991, but now it is an independent republic. The capital city is Tbilisi. Its population is almost 4 million.

The Georgians are an ancient people. Their capital Tbilisi was founded around AD 400, by the king Vakhtang Gorgasali. Western Georgia was part of the Roman Empire before then. The Arabs captured it in 635 AD. The culture continued and they flourished through trade. In the 900s Arabs influence diminished in Caucasia significantly. In 1008 Kingdom of Georgia was formed. It was the major country in the region until the Mongols invaded in 1223. Georgia was part of the Mongolian empire for a century on and off until 1334, when King Giorgi V took over. In the 1400s Georgia dissolved into several principalities. In the 1500s the Persians invaded Eastern Georgia four times from 1541-1544. In 1555 the Kings of Kartli ruled through the will of the Persian Shahs.

In 1783 The treaty of Georgievsk was signed between Catherine the Great of Russia and King Heraclius II, giving Russia the power to protect Georgia. Then, in 1798 the Persians burned Tbilisi to the ground.

From 1811 to 1918 Georgia was under the Tsar of Russia. Their culture survived intact. From 1918 to 1921 Georgia was independent, and then was part of the Soviet Union.

In 1991 most people from Georgia voted to be a free nation again, and Georgia declared their independence from the Soviet Union. Newly established Republic of Georgia saw bloody Civil War resulting in downfall of first-ever president of Georgia Zviad Gamsakhurdia. Georgia was also involved in War in Abkhazia. There was a rough patch between 1994 and 1995 when the economy was poor, although Georgia saw significant improvements in last few years. Now Georgia is applying to NATO and European Union. 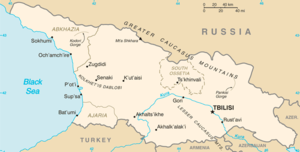 A map of Georgia

Georgia is next to the countries of Russia, Turkey, Armenia and Azerbaijan. It also has a coast on the Black Sea. It is at the edge of Europe and Asia.

Georgia has many mountains. Its highest point is 5,193 m above sea level. The mountains running through Georgia are called the Caucasus Mountains.

The highest mountain in Georgia is Mount Shkhara at 5,193 m. The coastline of Georgia is 310 km long. Georgia has about 25,000 rivers. The largest river is the Mtkvari.

Georgia is divided into 9 regions, 1 city, and 2 autonomous republics. These in turn are divided into 67 districts and 12 self-governing cities.[10]

The region of Abkhazia declared independence in 1999.[11] South Ossetia is officially known by Georgia as the Tskinvali region. Georgia considers both regions as occupied by Russia.[12]

The population of Georgia is about 4 million. About 1.2 million of these live in Tbilisi. People from Georgia are called Georgians. Most of them speak Georgian as their first language, though some people also speak Azerbaijani, Armenian, Russian or other languages.

Georgians have their own unique three alphabets/scripts, Asomtavruli, Nuskhuri and Mkhedruli, with Asomtavruli being the very first Georgian Script, which was said to be invented by King Pharnavaz I of Iberia

The most famous person to have come from Georgia is Josef Stalin.

Most Georgians are Christians, but there are some Muslims and Jews as well.

The currency of Georgia is called the Lari.