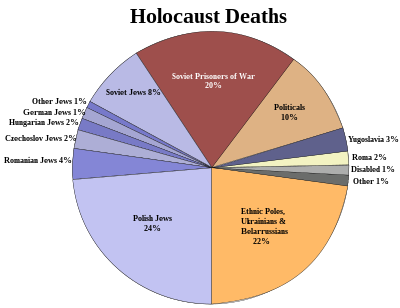 The Holocaust, sometimes called The Shoah (Hebrew: השואה), was a genocide in which Nazi Germany systematically killed people during World War II. About six million Jews were killed,[a][13][14] as well as five million others that the Nazis claimed were inferior (mostly Slavs, communists, Romani/Roma people, people with disabilities, homosexuals, and Jehovah's Witnesses). These people were rounded up, put in ghettos, forced to work in concentration camps, and then killed in gas chambers.[15] Jews were forced to wear the yellow Star of David, a symbol of their religion.

Why were the Jews killed?

There was hatred and persecution of Jews (anti-Semitism) in Europe for hundreds of years. Many people wrongly thought that all Jews became rich by stealing money from other people, such as Christians; that they did not like people other than their fellow Jews; and that they harmed children to use their blood for religious rituals (blood libel). These beliefs were not true, and were based on stereotypes and prejudices.

However, these beliefs were popular in the German-speaking world and elsewhere in the late 1800s.

Adolf Hitler was born in Austria during this time, when many people disliked Jews. He may have been jealous of Jewish success in Austria. However, in a book he wrote called Mein Kampf ("My Struggle"), he said it was the Jews' fault that Germany and Austria lost World War I. He also wrote that Germany's economic problems were the Jews' fault. Many people agreed with Hitler’s ideas and supported him as the leader of the Nazi Party.[16][17]

Not all deaths were written down, so the exact numbers are unknown. However, various sources approximate:

Led by Hitler, the Nazis killed millions of Jews. They forced Jews to wear the golden Star of David on their upper bodies. Jews were rounded up by the thousands and crammed into trains that took them to concentration camps like Auschwitz as well as death camps. Most of the Jews killed in the Holocaust were not German. They were from Poland or the Soviet Union.

The Nazis killed millions of people, hundreds at a time, with poison gas in special rooms called gas chambers. They forced others to dig giant holes in the ground where, after days of hard work, Jews and other prisoners were shot, buried, and burned in a mass grave. The Nazis executed many others by shooting, stabbing, or beating them to death. Still, others died in forced marches from one camp to another. Many other people died of starvation, diseases, and freezing to death because of the terrible conditions in the concentration camps.

On the other hand, there were people who saved Jews from the Holocaust, because they thought it was the right thing to do. Some of them were later given "Righteous Among the Nations" awards by Yad Vashem.

Some people say the Holocaust did not happen at all,[20] or was not as bad as historians say it was. This is called Holocaust denial. However, almost all historians agree that the Holocaust did happen and has been described correctly.[21] Many Holocaust deniers profess that the Nazis did not kill as many people as historians say. Instead, they claim many of these people died from disease or lack of food, usually in order to shift blame from the Nazis. These ideas have been disproven by historical accounts, eyewitness evidence, and documentary evidence from the Nazis themselves. Also, many Jews were killed because Hitler ordered it. In some countries in Europe, including Germany,[22] it is against the law to say that the Holocaust never happened.[23]