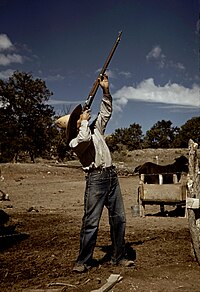 Shooting is when a rifle, shotgun or other weapons which fire a projectile, such as bows or crossbows, are fired. Even the firing of artillery, rockets and missiles can be called shooting. A person who is very good at shooting is a marksman. Shooting can take place in a shooting range or in the field in hunting, in shooting sports or in combat. Shooting is also an Olympic sport.

Shooting is also used in warfare, self-defense, crime, and law enforcement. When someone shoots random innocent people it is sometimes caused by misanthropy (hate for humans).

In most countries, people who want to shoot firearms need a license. Firearms can usually only be bought from registered shops.