The National Socialist German Workers' Party (Nationalsozialistische Deutsche Arbeiterpartei, abbreviated NSDAP), also known as the Nazi Party, was a German political party. It was started in 1920 from the Deutsche Arbeiterpartei (German Workers' party) (DAP),[4] which would later be renamed the NSDAP. On the day it was created, the party published its 25-point manifesto (book of ideas). The items in this list of ideas included getting rid of the Treaty of Versailles; gaining more land for the German people; taking away any income people had not earned by working; taking away Jewish people's citizenship; changing the education system; and setting up a strong central government.[4] It is most known for being Hitler's political party.

Until 1923, the NSDAP was most popular in Bavaria.

In 1923, the Nazi Party tried to start a coup d'état in Munich to take over Germany, but failed. This battle was called the Beer Hall Putsch. Hitler was sentenced to five years in prison for treason. However, he was let out of prison after nine months. Other people who participated in the Beer Hall Putsch were given the death penalty or 5-6 years imprisoned. The government also made the NSDAP illegal in Germany.

While he was in prison, Adolf Hitler wrote most of Mein Kampf ('My Struggle'). In this book, he wrote down his political ideas and his future plans for Germany.

In 1924, Hitler was let out of prison early. He restarted the NSDAP. He wanted to gain power legally, through elections. At this time, the NSDAP was only one of a few extreme right-wing, nationalist political parties in Germany. There were many other parties with similar ideas then. Important people like Fritz Thyssen and Emil Kirdorf, both leaders of big industries, supported the Nazi Party.

The next elections to the Reichstag were held in 1928. In these elections, the Nazi Party won 2.6% of the vote. The party decided to decrease its anti-Semitic slogans in order to do better in the next election. Instead, the NSDAP focused more on foreign policy and on terrorising the German people. In local elections in 1929 and 1930, the NSDAP won about 10% of the vote.

In 1930, President Paul von Hindenburg dissolved the Reichstag. The Nazi Party saw this as an opportunity. In the elections on 14 September, 1930, the NSDAP won 18.3% of the vote, and had become the second biggest party in Germany.

At this time, most German people wanted to get rid of the Weimar Republic (the Weimarer Republik). Weimar was the German city where the German constitution was written after the First World War. People also wanted a stronger Germany, with more soldiers. The Treaty of Versailles had made it illegal for Germany to have some types of weapons and ships.

On January 30, 1933, Franz von Papen offered to make Adolf Hitler the Chancellor of Germany in a nationalist cabinet. He did this in secret. This was a Machtübergabe, or 'transfer of power'. However, later on, the NSDAP started to call it the Machtergreifung ('seizing power'). It was better for Nazi propaganda to say that they took power from the Weimar Republic, instead of being made the Republic's legal government.

The last free election in Weimar Germany was in March 1933. The Nazi Party won 44% of the vote. This was not a majority. After the Reichstag fire, they managed to get the two-thirds majority they needed to pass the Ermächtigungsgesetz (Enabling Act). With this new law, they dissolved parliament; gave Hitler the power to do anything he wanted; and made all political parties (except the Nazi party ) illegal.

After this, the Nazi party became very important. People had to be party members to get some jobs, or to get promoted. The Nazi party was busy until Germany surrendered to the Allies on 8 May 1945.

The NSDAP dissolved itself on 8 May 1945. After that, the NSDAP no longer existed.

They made some reforms which still exist today. For example:

But the Nazis did so many bad things that it is now illegal in Germany to display the swastika symbol (shown on the flag above) or use slogans such as Sieg Heil. In November 2010, a British member of the European Parliament, Godfrey Bloom, was forced to leave Parliament. This happened after he shouted the Nazi slogan 'Ein Volk, ein Reich, ein Führer' at a German member of Parliament.[5] 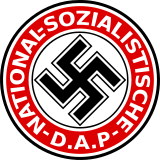