The main debating chamber in Strasbourg where all the members meet

The European Parliament (formerly European Parliamentary Assembly or Common Assembly) is the parliament of the European Union (EU). EU citizens elect its members once every five years. Together with the Council of Ministers, it is the law-making branch of the institutions of the Union. It meets in two locations: Strasbourg and Brussels .

The Parliament is made up of its 751 members, called "MEPs". Each member speaks for an area of Europe, for example London, Denmark or Scotland. Anyone can be elected, they are elected by all the EU citizens, the people who are citizens of a country in the EU. People have been elected to Parliament since 1979, before that they came from the Parliaments of each country. Because MEPs come from lots of countries, they all speak different languages (24 in 2013) at Parliament. This means that the Parliament has to have lots of interpreters because thay are protected right to first language (multilingualism).

Unlike other international groups of politicians, MEPs do not sit in groups of countries, but they sit next to people who they share ideas with. The two largest groups are the "European People's Party-European Democrats" and the "Party of European Socialists". But these groups work together to agree, so they do not fight and try to make a law if the other does not like it.

The European Parliament's power depends on which area of the EU it is working in. The EU has three areas, the "Community", its representation to other countries, and things to do with police and courts. In the last two areas, it can not do much as the Council takes care of those issues, but in the Community (which is the largest area) it can change or stop any law. But the Council also has to agree, and sometimes they disagree and cannot make a law. 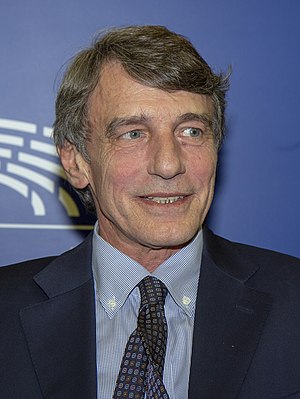 David Sassoli is the President, who organises the Parliament

When the Parliament wants to make a new law, they all vote at the same time. But before then, they make many small changes while talking with experts who know about the things that the new law will change. As in other parliaments, they do this in small meetings known as "Committees" of between 28 and 86 MEPs.

The Parliament has a President. The President is elected by the MEPs, two times every two and a half years, to organise the meetings and speak for the Parliament when meeting other leaders. Since 2019, the president has been Italian politician David Sassoli.

The Parliament was made in 1952 and was then called the "Common Assembly". At this time, it did not have any power, it was only asked to comment on laws made by the "European Coal and Steel Community". In 1957, it was renamed the "European Parliamentary Assembly" and got to comment on the laws of the "European Economic Community" and the "European Atomic Energy Community". Over the following years, it was given a few powers over laws and money and it called itself the "European Parliament" in the 1960s. It wanted to be elected so it could do more, as if people voted for the people in Parliament, the Council and Commission would have to pay more attention to it (this is known as "Democratic Legitimacy", the idea that your voice is worth more if you have lots of people supporting from an election).

In 1979 it held its first election, and it gained more powers and also members because more countries joined the Communities and they elected people as well. In 1993 it was given even more, and power over the Commission, when the European Union took the place of the Communities. It is now known as one of the most powerful Parliaments in the world.