KidzSearch Safe Wikipedia for Kids.
Jump to: navigation, search
For a list of all chancellors, see List of chancellors of Germany. 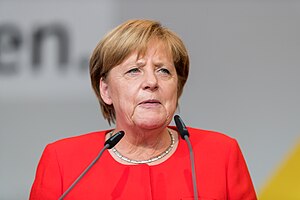 The Chancellery in Berlin is the seat of the Chancellor

The current chancellor is Angela Merkel (CDU), the first woman to be elected in this position.