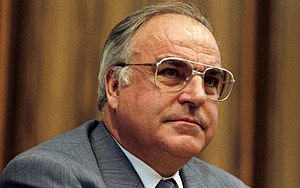 Helmut Josef Michael Kohl (3 April 1930 – 16 June 2017) was a German CDU politician. He was the last Chancellor of West Germany, and he stayed in office after reunification as the first Chancellor of a united Germany.

From 1969 to 1976 he was the Minister President of the state of Rhineland-Palatinate and from 1982 to 1998 Chancellor of the Federal Republic of Germany. Kohl helped to arrange the process of German reunification and participated considerably in the European unity process. A pro-EU conservative, he was often compared to Ronald Reagan and Margaret Thatcher, two other leaders with similar views in the 1980s. In 1998, he retired as Chancellor, as the SPD won the election. His replacement was Gerhard Schröeder.

His involvement with the CDU donation affair, and in particular offences against party law is open to question.