Hamburg, or in full Free and Hanseatic City of Hamburg (German: Freie und Hansestadt HamburgLua error in package.lua at line 80: module 'Module:Category handler/data' not found., Low German: Friee un Hansestadt Hamborg), is a city in the north of Germany on the banks of the River Elbe, 18 km away from the North Sea. It is also one of the States of Germany.

Since it was an important member of the Hanseatic League, the city's official name still includes Hansestadt (Hanseatic city). Other German cities that do the same today are: Lübeck, Rostock, Wismar, Stralsund, Bremen, Greifswald and Demmin. The membership in this trade alliance has influenced the architecture of the city to a great extent. It has also left some marks in the region around the city. Strategic bombing in World War II devastated the city.

Hamburg's harbour is, by shipments, the second largest harbour in Europe (after Rotterdam) and among the ten largest in the world. It is a very important gate to the countries along the Baltic Sea and Eastern Europe.

There are about 120,000 businesses in Hamburg.[6] The company Airbus has an assembly plant for large civil aircraft in Hamburg. 30,000 people are employed in Hamburg's aircraft industries. There are only two other locations worldwide in this scale, Seattle in the United States and Toulouse in France.

About half of Germany's nationwide newspapers and magazines are made in Hamburg. Germany's most-viewed television news Tagesschau is broadcast from Hamburg.

Hamburg's red-light district (in Sankt Pauli) is the largest in Europe. 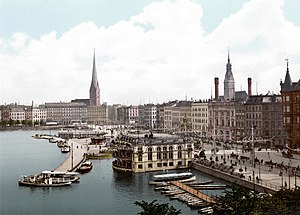