German (German: Deutsch) is a West Germanic language. It is spoken in Germany, Austria, Switzerland, Liechtenstein and Luxembourg; natively by around 100 million people. It is the most widely spoken mother tongue in the first language. There are some people who speak German in Belgium and in the Netherlands and in France and Northern Italy. There are people who speak German in many countries, including the United States and Canada, where many people emigrated from Germany. It also spoken in Eastern Europe, Bulgaria, Romania, and Russia.

German is a part of the West Germanic language family and is much like English and Dutch. Much of the vocabulary in German is related to English, but the grammar is more complicated.

In writing, every noun must start with a capital letter. German is the only language that still has that rule, but Danish and English did so a long time ago.

Standard German is an official language in Switzerland, but the Swiss dialect of German is difficult to understand for native speakers from Germany and even for Swiss who are not native to speaking German. One reason that the dialects are still so different today is that even if Switzerland adopted Standard German, mostly as a written standard, German Swiss in World War II wanted to separate themselves from the Nazis by choosing to speak dialect over the Standard German.[4]

Swiss German also has some differences in spelling, for example, the letter ß, which is used only in German, is replaced by ss. 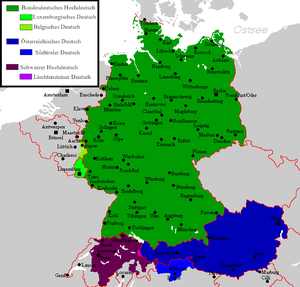