Santa Catarina is a state in Southern Brazil. It has with one of the highest standards of living in the country. Its capital is Florianópolis, which partly lies on the Santa Catarina Island.

Santa Catarina shares borders with the states of Rio Grande do Sul to the south and Paraná to the north. It is bordered on the east by the Atlantic Ocean, and to the west it borders the province of Misiones, Argentina.

Santa Catarina is the most European state of Brazil. Most of the people that live there are descendants of Portuguese, German and Italian immigrants.

Its largest city is Joinville.

European colonies began with the Spanish settlement of Santa Catarina island in 1542. The Portuguese took control in 1675. The captaincy of Santa Catarina was created in 1738. Large numbers of European immigrants, especially from Germany, began arriving in the early 19th century. Immigrants from Italy, Poland, Russia, Ukraine, Japan and other parts of Europe later came. This led to many small, family held farms in the state.

In late March 2004, the state was hit by the first ever hurricane recorded in the South Atlantic. Because there is no naming system for such an event in Brazil, Brazilian meteorologists called it Catarina, after the state.

Santa Catarina is one of the Brazilian states that shows the most signs of recent European colonization. Most of the population are descendants of European settlers.

The Portuguese started arriving in the 1750s. The came mainly from the Azores islands, and colonized the coast. In the late 18th century, half of Santa Catarina's population was Portuguese-born. These Portuguese created many important towns of the State, such as Florianópolis, the capital.

Germans started arriving in 1828. They were peasants that came to Brazil to get their own lands. They did this since Germany had many people and many people had no lands to work. German immigration was very low, until the 1850s, when many Germans started arriving in Southern Brazil. To create more German colonization in Southern Brazil, the Brazilian government created many German colonies. Many of these German colonies became big towns, such as Blumenau and Joinville, the largest city in Santa Catarina.

Germans had kept to themselves in these communities for decades. They did not have much contact with other people of Brazil. For generations they were able to speak German and keep their German traditions in Brazil. This changed in the 1930s, when Brazil declared war against Germany in 1942. The German immigrants learned Portuguese and followed a Brazilian way of life.

Nowadays, the German influence in the State of Santa Catarina is still very strong. Many towns still have many parts of the German culture. For example, Pomerode is a small town where 90% of the people are German-Brazilian. Most of the people speak German fluently. Another example is the Oktoberfest of Blumenau and many other towns in the region. The architecture and food also show German influence.

Italian settlers started arriving in Santa Catarina in 1875. They came in large numbers until the 1910s. They were peasants from Northern Italy. They created Italian colonies close to the coast. In the beginning, the Italian settlement had failed. This was because many Italians died of tropical diseases or left the colonies to find better conditions. However, in southern Santa Catarina, they found cooler weather and better lands, and the colonies did very well. Many Italians worked in the coal industry. 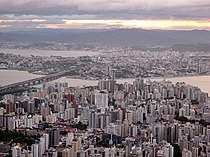 Florianópolis, the capital of Santa Catarina.