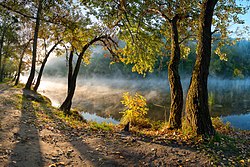 Ukraine is a republic. The capital of Ukraine is Kyiv (Ukrainian: Київ). It was a part of the Soviet Union from 1922 until 1991.

The official language of Ukraine is Ukrainian (Ukrainian: українська мова, [ukrajin’s’ka mova]). In the 2001 census, about 29% of people in Ukraine said that they consider Russian to be their main language. These two East Slavic languages are similar in some ways but different in other ways.[8]

Ukraine is divided into 24 oblasts and one Autonomous Republic of Crimea.

The largest cities of Ukraine

The largest cities in Ukraine are:

The name "Ukraine" (u-krayina) is variously interpreted as "edge" or "borderland", but this was proved false. Language specialists are still searching for the true meaning of the word.[9]

It was first used in reference to a core part of the territory of Kyivan Rus in the 12th century. In English, Ukraine was usually used as "the Ukraine". But after 1991, adding "the" is no longer correct.

Many different tribes lived on the territory of modern Ukraine since pre-historical times. Most historians believe that the Great Steppe at the North of the Black Sea was a homeland of all Indo-European and Indo-Iranian languages. Some believe it was also a birthplace of the whole Caucasian race. Wends, Goths, Huns, Sclaveni, Avars and other tribes and tribal groups fought among themselves, joined unions, terminated and assimilated each other.

By the middle of 4th century AD Antes joined other tribes and established a state under their rule. Their state fell under the pressure of Avars in 602 AD and their name was longer mentioned. Since the 7th century over 10 tribal groups joined under the name "Slavs" and made their own state named Rus. The chronicles mention three centers which formed this state: Kuyavia (Kyiv land with Kyiv itself), Slavia (Novgorod land) and Artania (exact location unknown).

Historians still argue about whether Kyiv was founded by Slavs themselves, or they just captured the Khazar fortress which was located on the bank of the Dnieper river, but since the 10th century, it became the capital of the largest and most powerful state in Europe.

Kyivan Rus, is the medieval state of Eastern Slavs.[10] Established by the Slavic with the help of the Varangian squads whose force was used to integrate separate tribes and their lands into one powerful state. Varangian princes, who ruled Rus from its first years were gradually assimilated by natives, but the dynasty started by semy-legendary Ririk survived and continued to govern their separate principalities even after the collapse of Rus.

At an early stage of its existence Rus destroyed such powerful states as the Khazar Khaganate and Old Great Bulgaria. Rus princes successfully fought against the Byzantine Empire, whose emperors had to pay tribute to them. Rus' finally disintegrated into separate principalities.

In the reign of Volodymyr the Great (980-1015) the Kyivan State almost finished its expansion. It occupied the territory from Peipus, Ladoga and Onega lakes in the north to the river Don, Ros, Sula, Southern Bug in the south, from the Dniester, the Carpathians, the Neman, Western Dvina River in the west to the Volga and the Oka River in the east, its area became about 800,000 km2. Although some of his predecessors already accepted Christianity for themselves, Vladimir decided to convert the entire population of the state to the new religion. Partially with the help of Byzantine missionaries preachers, partly by the brutal violence, he finally made all Kyiv population to be baptized. For this action, the Ukrainian, and later the Russian Orthodox Churches canonized him under the name of Vladimir the Baptist.

During the reign of Yaroslav the Wise, (1019–1054), Rus reached the zenith of its cultural development and military power. Rus raised the prestige of Eastern Slavs in Europe, improved the international significance of Kyiv. Rus influenced the political relations in all of Europe, Western Asia, and in the Middle East. Kyivan princes supported the political, economic, dynastic relations with France, Sweden, England, Poland, Hungary, Norway, Byzantium.

The Rus state also ruled non-Slavic people (Finno-Ugric population of the North, Turkic of the East and South, Balts of the West etc.). Those people gradually assimilated with the Slavs, and with each other, establishing a framework for the future emergence of three new Eastern-Slavic peoples.

The Kyivan State was an eastern outpost of European Christendom, it kept the movement of nomad hordes to the West, and reduced their onslaught against Byzantium and Central European countries.

After the death of Mstyslav Volodymyrovych (1132), Rus lost its political unity and finally was divided into 15 principalities and lands. Among them Kyiv, Chernygiv, Volodymyr-Suzdal, Novgorod, Smolensk, Polotsk, and Halycian lands and principalities were most large and powerful.

Major political conditions of fragmentation were:

While Kyiv was the center of all social, economic, political, cultural and ideological life in the country for a long time before, other centers have competed with it from the mid-12th century. There were old powers (Novgorod, Smolensk, Polotsk), as well as new ones..

Numerous princely feuds, large and small wars between different lords, were tearing Rus. However, the ancient Ukrainian state did not fall apart. It only changed the form of its government: The personal monarchy was replaced by the federal one, Rus came to be co-ruled by the group of the most influential and powerful princes. Historians call this way of governing "the collective suzerainty." The Principality of Kyiv remained a national center, and the residence of bishops.

In 1206 the new powerful military-feudal Mongolian state headed by Genghis Khan started the war of conquest against his neighbors. In 1223 in the battle near the Kalka river 25,000 Tatar-Mongols won a crushing victory over the squads of Southern Rus Princes, who were unable to come together even in the face of grave danger. Under the leadership of Batu, Genghis Khan's grandson, from 1237-1238, they conquered Riazan, Volodymir, Suzdal, and Yaroslavl lands.

In 1240, they attacked Kyiv. The city was plundered and destroyed. According to the legend, the enemy saved governor Dimitri's life for his personal courage in the battle. Then Kamenetz, Iziaslav, Volodymyr, and Halych lost against invaders. Batu was able to attach most of Rus to his empire, the Golden Horde, which covered the whole territory from the Urals to the Black Sea,

After the fall of Kyivan State, the political, economic and cultural center of Ukrainian lands was transferred to the Halycian-Volyn Land. In 1245 Prince Danylo of Halych had to admit his dependence on the Golden Horde. Hoping to get help from Catholic Europe in his the struggle for independence, he also made a secret alliance with Poland, Hungary, Masovia and the Teutonic Knights. In 1253 he received the crown from Pope Innocent IV and became a King of Rus. In 1259, due to the lack of military aid from the West, the king was forced to re-recognize the supremacy of the Horde. His successor, Lev I had to take part in theTartar campaigns against Poland and Lithuania.

In 1308 the government moved to Danylo's grandchildren - Andrew and Lev II, who started the new struggle against the Golden Horde allied with the Teutonic knights and princes of Mazowia. However, after their death the last monarch Yuri II again had to claim himself as the Golden Horde vassal. He was murdered in 1340 and his death gave the rise to Poland and Lithuania (the neighbors who had a dynastic right for the throne of Rus) to start a war for the Halycian-Volyn heritage. In 1392 Galicia, with Belz and Chelm Lands were finally icorporated to the Kingdom of Poland and Volhynia to the Grand Duchy of Lithuania.

At the end of the 14th century, Ukrainian territories were divided between different states. Lithuania seized Kyiv, Chernihiv and Volyn Lands. Poland ruled in Halycian and Podolian. The Southern Ukraine was under the rule of the Crimean Khanate (formed in 1447) and the Eastern under the power of Muscovy. In 1569 Lithuania and Poland merged to the united state called Commonwealth (Polish: Rzecypospolyta) to deal with neighbors, as a result, the central Ukrainian lands of Lithuania came under Polish control.

As for the origin and definition of the name "Rus" there is no consensus among researchers. Several versions exist:

Ukrainian historians generally adhere to anti-Norman opinion, while not denying the contribution Varangians in the process of formation of Rus state system. Russ, or The Rus Land in their opinion means:

At the end of the 15th century, the groups of warriors who called themselves Cossacks appeared on the territory between the borders of Lithuania, Muscovy and the Crimea, in the "wild steppes" of Zaporizhia. From the 16th century the Sich became their military centre. Zaporizhian Cossacks participated in the wars on the side of the Commonwealth: the Livonian War (1558-1583), the Polish-Muscovite War (1605-1618), Khotyn war (1620-1621), and Smolensk war (1632-1634). Cossacks also organized their own campaigns in Moldavia, Muscovy, and Crimea, on the Black Sea coast of Bulgaria and in Asia Minor for looting. They willingly became mercenaries, particularly during the Thirty Years' War (1618-1648).

Due to the legal and social oppression of the nobility Cossacks repeatedly revolted. The largest rebellions were raised under the guidance of: Kosynskiy (1591-1593), Nalyvaiko (1594-1596), Zhmaylo (1625), Fedorovych (1630), Sulima (1635), Pavlyuk (1637) and Ostryanin (1638). Cossacks again and again defended the rights of the Ukrainian population in the Commonwealth who experienced religious and national oppression regularly.

For the conflict in the 1850s see Crimean War.

In 1917 an independent Ukrainian People's Republic was established. The Red Army freed it and made it into the Ukrainian Soviet Socialist Republic.

Soviet Russia in the 1920s encouraged the Ukrainian language and Ukrainian culture. In the 1930s this policy changed to making the Ukrainians into Russians. There were mass repressions of Ukrainian poets, historians and linguists. As in other parts of the Soviet Union millions of people starved to death in 1932 and 1933.

In 1986, the fourth reactor at the Chernobyl Nuclear Power Plant exploded as a result of an improper test. The accident contaminated large portions of northern Ukraine and southern Belarus with uranium, plutonium, and radioactive isotopes. It was one of only two INES level 7 accidents (the worst level) in the history of nuclear power, the other being the Fukushima nuclear disaster in Japan.

Under the second Soviet occupation repressions against Ukrainian nationalists continued and lasted till dissolution of the Soviet Union in 1991.

In the Soviet epoch Ukraine was renamed to so-called a "Soviet Socialist Republic" incorporated into Soviet Union. Independence day — 24 August 1991

Constitution of Ukraine was adopted by Parliament (Verkhovna Rada) 28 July 1996 with changes 8 December 2004.

The political demonstrations in autumn-winter 2004 after the Presidential elections gathered millions of people all over the country. On November 26, 2004, Victor Yuschenko lost the Ukrainian presidential election (Viktor Yanukovych was declared winner). However, Yuschenko and his followers argued that the election had been corrupted. They argued that the election results had been falsified by the Ukrainian government, in support of the opposing candidate Victor Yanukovych.[11] They organized political demonstrations in autumn-winter 2004 that gathered millions of people all over the country. They called the demonstrations The Orange Revolution (Ukrainian: Помаранчева революція). Former Prime Minister Yulia Tymoshenko was an important ally of Victor Yuschenko during the demonstrations. The Constitutional Court of Ukraine ordered a second round of elections, which Yuschenko won.

Big pro-European Union protests called Euromaidan (Ukrainian: Євромайдан) began in November 2013 and made the President go away in February.

In March 2014, Russia occupied Crimea, made a pseudo-referendum which proclaimed the Crimea independence and annexed it. Most countries did not recognize the referendum. The EU, OSCE, USA and Ukraine demanded that Crimea be returned. Several countries sought to use economic sanctions to punish Russia's leaders for this.[12]

In April, 2014 Ukraine military attack against people in Donbass in eastern Ukraine, which has many Russian-speaking people. This began a war to control Donbass.

In 2016, the New Safe Confinement was built to cover the remains of the Chernobyl Nuclear Power Plant and prevent radiation from escaping.