Lua error in package.lua at line 80: module 'Module:WPMILHIST Infobox style' not found. The Thirty Years' War was fought from 1618 until 1648. Though it was primarily centered in Germany, several other countries became involved in the conflict, including France, Spain, and Sweden. In fact, almost all of the powerful countries in Europe were involved in the war. It began as a fight about religion — the Protestants and Catholics were the two groups that disagreed. As the war continued, the Habsburg dynasty (a Catholic family) and other organizations used the war to try and get more power. One of the examples of this is that Catholic France fought for the Protestants. This made the France-Habsburg even worse.

The Thirty Years' War caused things like famine and disease in almost every country involved. The war lasted for 30 years, but the problems that caused the war were not fixed for a long time after the war was over. The war ended with the Treaty of Westphalia.

Origins of the War

There were several reasons that the Thirty Years' War started. 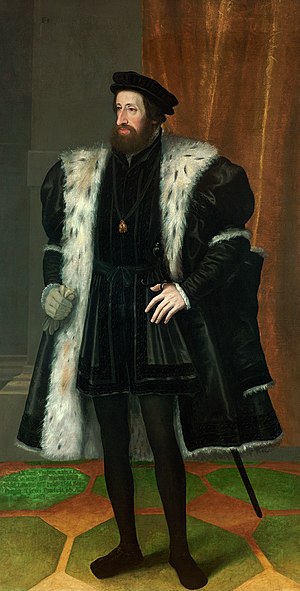 Ferdinand I, Holy Roman Emperor and King of Bohemia. He encouraged the Council of Trent to allow Communion in Both kinds for German and Bohemian Catholics.

First, the Peace of Augsburg (1555), which was signed quickly by Charles V, agreed with the 1526 Diet of Speyer and stopped the fighting between the Lutherans and the Catholics in Germany.

The Peace of Augsburg said that:

The Peace made the violence end for a bit. But it did not fix the real reason that the Lutherans and Catholics were fighting. Both of them said it meant different things. The Lutherans said it was only an agreement that would last for a short time. Calvinism came quickly into Germany. Calvinism was a third Christian group in Germany, but it was not part of the Peace of Augsburg.

Second: the powerful countries in Europe in the 17th century often disagreed about matters of Politics or Economics. Spain wanted land in some of the German states, because the Germans owned some of the Spanish Netherlands. The Dutch fought the Spanish to get independence. They got it in some wars that ended in 1609. 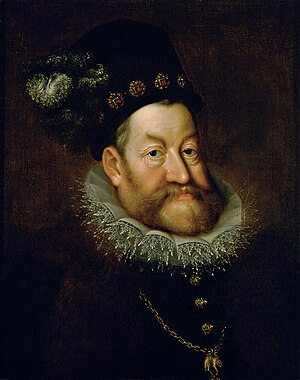 Third: the Holy Roman Empire was a broken group of nations. The empire had nations like the Austrian House of Habsburg, Bavaria, the Electorate of Saxony, the Margravate of Brandenburg, the Electorate of the Palatinate, Hesse, the Archbishopric of Trier and Württemberg, and other small nations and towns. Only Austria was capable of operating on its own. Countries often made alliances with other places ruled by relatives.

Fourth, Religious groups were not agreeing during the second half of the 16th century. The Peace of Augsburg was not working because some bishops had not given up their bishoprics, and Catholic rulers in Spain and Eastern Europe wanted to make Catholicism strong in the region. This caused fighting between the groups. The Catholics made many Protestants leave their home lands. Some places gave Protestants permission to worship. These disagreements caused violence.

Ferdinand II, Holy Roman Emperor and King of Bohemia. His firm Catholicism was the major cause of the war. 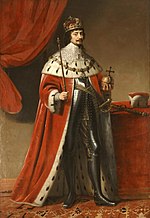 Frederick V, Elector Palatine as King of Bohemia, in 1634, two years after he died. Frederick is called the "Winter King" of Bohemia because he reigned for less than three months in 1620. He was put in power by a rebellious faction.

Fifth, the Holy Roman Emperor Matthias died without any children to take his place in 1619. He was Catholic. His lands were given to his cousin Ferdinand of Styria. Ferdinand was Matthias's closest male relative. He became Ferdinand II, Holy Roman Emperor. Ferdinand had been educated by the Jesuits, and was a Catholic. He wanted to make Catholicism the only religion again. This made him unpopular in Hussite Bohemia. They rejected Ferdinand and launched the Thirty Years' War. The War can be divided into four major phases: the Bohemian Revolt, the Danish intervention, the Swedish intervention, and the French intervention.

Emperor Matthias, who had no children, had died leaving the throne to Ferdinand II. Some of the Protestant leaders of Bohemia thought they would lose the religious rights granted to them by Emperor Rudolf II. They liked the Protestant Frederick V, Elector of the Palatinate (successor to Frederick IV) better. Frederick V was the creator of the <<<<. Other Protestants supported the opinion of the Catholics.

So, in 1617, Ferdinand was elected by the Bohemian Estates to become the Crown Prince, and automatically upon the death of Matthias, the next King of Bohemia. The king-elect then sent two Catholic councillors (Wilhelm Grav Slavata and Jaroslav Borzita Graf Von Martinicz) as his representatives to Hradčany castle in Prague in May 1618. Ferdinand wanted them to run the government while he was gone. Suddenly, the Bohemian Hussites took them, put them on a mock trial, and threw them out of the palace window which was 20 feet off the ground (this is called defenestration, or, more specifically: the defenestration of Prague). Remarkably, they survived and did not get hurt. The Catholics said that angels appeared and carried them to safety, while the Protestants said that they landed in a pile of manure which saved their lives.