The Peace of Westphalia refers to the pair of peace treaties, the Treaty of Osnabrück and the Treaty of Münster, signed on May 15 and October 24 of 1648, which ended both the Thirty Years' War and the Eighty Years' War. The treaties involved the Holy Roman Emperor, Ferdinand III Habsburg, the other German princes, Spain, France, Sweden and representatives of the Dutch Republic. The Treaty of the Pyrenees, signed in 1659, ending the war between France and Spain, is also often considered part of the overall accord.

The peace negotiations were held in the cities of Münster and Osnabrück, which lie about 50 km apart from each other, in the present day German states of North Rhine-Westphalia and Lower Saxony. Sweden had favoured Osnabrück due to its Protestant background, France chose Münster due to its Catholic background. In any case two locations were required because Protestant and Catholic leaders refused to meet each other. The Catholics used Münster, while the Protestants used Osnabrück.

Spain accepted the independence of the Dutch Republic. 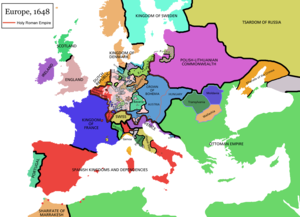 A simplified map of Europe after the Peace of Westphalia in 1648.

The power which Ferdinand III had taken for himself against the Holy Roman Empire's constitution was stripped. That meant that the rulers of the German states were again able to determine the religion of their lands.

There were also territorial adjustments.