Coat of arms of Lviv 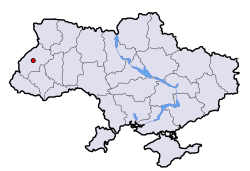 A map of the Ukraine with Lviv shown in red

During the city's history, it was ruled by many countries. When part of Poland it was called Lwów (pronounced and sometimes spelled Lvov). In German, it was known as Lemberg, that was part of the Austrian and Austro-Hungarian Empires and again under Nazi German occupation. From 1200 until 1945 it belonged to Poland.