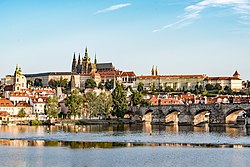 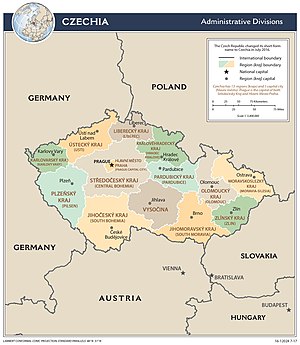 Regions with their administrative seats

listen)) is a country in Central Europe. As of 2 May 2016, the official short name of the country is Czechia (Czech: ČeskoLua error in package.lua at line 80: module 'Module:Category handler/data' not found.). The capital and the biggest city is Prague. The currency is the Czech Crown (koruna česká - CZK). €1 is about 25 CZK. The president of Czechia is Miloš Zeman. Czechia's population is about 10.5 million.

The local language is the Czech language, a Slavic language related to languages like Slovak and Polish.

Czechia has no sea; its neighbour countries are Germany, Austria, Slovakia, and Poland.

Its history dates from the 9th century AD, for a long time it was one of the most powerful countries in Central Europe. Later on it was the biggest, most populated and richest country of the First Reich, where many Emperors started their career. Under the conditions of the Treaty of Vienna 1515 parts of Czechia, then in the Kingdoms of Bohemia and Hungary, came under Habsburg rule after the death of Louis the Jagiellon in 1526. They stayed a part of the Habsburg dynasty rule until 1918.

The area of the today's Czechia was a part of Czechoslovakia (current area of Czechia and Slovak republic) from 1918 to 1992. Czechoslovakia became independent in 1918 from Austro-Hungarian Empire. The first Czechoslovakian president was Tomáš Garrigue Masaryk. In February 1948 the Communist party took over the country and for the next 41 years Czechoslovakia was a Socialist state with a rule of one (Communist) party. In 1968 there was a reformation movement (Prague Spring) within the Communist party, but reforms were stopped by the invasion of Warsaw pact armies. In November 1989 Czechoslovakia returned to democracy through the peaceful "Velvet Revolution".  Czechoslovakia peacefully split into two countries (Czechia and Slovakia) in 1993. Czechia has been a member of the European Union since 1 May 2004, and a member of NATO since 12 March 1999.

See also: List of cities in the Czech Republic

In 1949 the Communist government created 13 centralized regions instead of historical countries. In 1960 the regions changed leaving only 8 regions. In 2000 14 regions were formed with their own regional self-government.

Czechia has one of the least religious populations in the world. According to the 2011 census, 34.2% of the population stated they had no religion, 10.3% were Roman Catholic, 0.8% were Protestant (0.5% Czech Brethren and 0.4% Hussite), and 9.4% followed other forms of religion both denominational or not (of which 863 people answered they are Pagan). 45.2% of the population did not answer the question about religion.