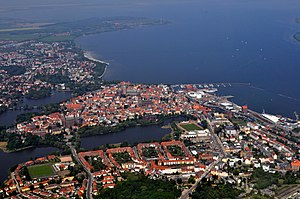 Stralsund is a town in Mecklenburg-Western Pomerania, Germany on the south coast of the Strelasund (a sound of the Baltic Sea separating the island of Rügen from the mainland).[2]

In 1293 Stralsund became a member of the Hanseatic League.[2]

From 1949 until German Reunification in 1990, Stralsund was part of the German Democratic Republic.