Mecklenburg-Western Pomerania (German: Mecklenburg-Vorpommern) is one of the 16 States of Germany. The capital is Schwerin. 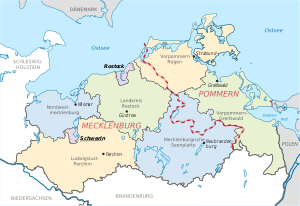 The largest cities in the state are:

All have a population of less than 200,000. Schwerin, the state capital, is the smallest state capital in Germany. Usually Schwerin would not be called a city. In Germany a city has over 100000 people.

Mecklenburg-Western Pomerania was going to change the borders of all of its urban districts (towns) and rural districts (kreise or "counties". The state supreme court stopped the changes.