Mecklenburg-Vorpommern is one of the 16 States of Germany. The capital is Schwerin.

It made part of former East Germany.

It is the most northeastern state of Germany. It borders the Baltic Sea in the north, Poland in the east, Brandenburg in the south, Lower Saxony in the southwest and Schleswig-Holstein in the west.

Mecklenburg-Western Pomerania is low-lying and has many rivers, canals and lakes. The Stettin Lagoon lies partly in this state and partly in Poland.

Seats in the state parliament (Landtag) since 2016:

The largest cities/towns in the state are:

Besides Rostock all have a population of less than 200,000. Schwerin, the state capital, is the smallest state capital in Germany. Usually Schwerin would not be called a city. In Germany a city has over 100,000 people.

Mecklenburg-Western Pomerania was going to change the borders of all of its urban districts (towns) and rural districts (kreise or "counties"). The state supreme court stopped the changes. 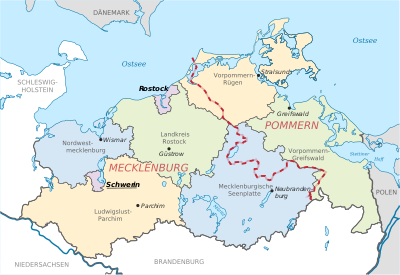