Chicago is the largest city in Illinois, USA. It is the third largest city in the United States, although it used to be the second largest. Chicago is next to one of the five Great Lakes, Lake Michigan. In the 2000 census, almost 2,900,000 people lived there, with six million more people living nearby.

The city also has about 300 bridges.[3] Chicago is sometimes called the "Windy City". The city was founded by Jean Baptiste Point du Sable. It opened in 1970.[4]

Chicago was incorporated as a city in 1837, near a portage between the Great Lakes and the Mississippi River watershed. Today, Chicago is listed as an alpha+ global city by the Globalization and World Cities Research Network, and ranks seventh in the world in the 2012 Global Cities Index. The city is an international hub for finance, commerce, industry, telecommunications, and transportation, with O'Hare International Airport being the second-busiest airport in the world in terms of traffic movements. The first skyscraper in the world was built in Chicago.[5] It was the Home Insurance Building.[5] In September 2013, the FBI named Chicago "The Murder Capital of the United States" with 550 murders recorded in 2012. 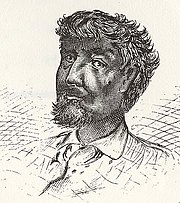 A drawing of The Great Chicago Fire, 1871

Chicago was founded in the early 1700s by Jean Baptiste Point du Sable. The city was founded to create a canal that allowed steamboats and sailing ships on the Great Lakes to connect to the Mississippi River.[6][7] The city later became a trading center for food, crops, and fur. The city grew very fast because of how the river back then was clean and healthy to drink. In 1837, Chicago became a city. The city grew until the Great Chicago Fire happened in 1871. The fire lasted for almost a week. Almost half the city and it's population were lost in the fire. After the fire, Chicago grew faster than ever.

Also after the fire happened the city's economy grew and also more people migrated here from parts of the world. The immigrants include, Germans, Jews, Irish, Swedes, Poles, and Czechs. The immigrants made almost two-thirds of the city's population. In 1889, Jane Addams had built the first Hull house in Chicago for children and the poor. The city's public health became better, so that the city would be healthy. In 1893, the city hosted the World's Columbian Exposition. And later the University of Chicago was founded in 1892.

During a Democratic party convention in 1933, the 44th Mayor of Chicago, Anton Cermak was shot and killed when a man tried to shoot at Franklin D. Roosevelt when Cermak blocked the bullet so that the President would not be hurt. Cermak died hours later. In 1955, Mayor Richard J. Daley became one of the most powerful and well known Democrats in the country. He also helped Martin Luther King and other activist share their thoughts and opinions without being arrested in Chicago.

In 1968, during the 1968 Democratic National Convention led to a massive protest and riots that happened where the convention was held. Richard J. Daley helped create the construction sites for the Willis Tower, O'Hare International Airport, the McCormick Place, and the University of Illinois at Chicago. Jane Byrne helped Chicago to become one of the most popular tourist attractions in the United States. She was the first female mayor of Chicago.

In 2011, Rahm Emanuel became the first Jewish Mayor of Chicago. Emmanuel helped fix the Chicago Public School system and helped fix the Chicago Police Department. In 2012, the NATO Summit was held here in Chicago and lasted for three days. The city would also host the 38th G8 summit, but was moved to Camp David because the city was already hosting the NATO summit in Chicago.

Chicago has the fourth-largest gross domestic product (GDP) in the world, just behind Tokyo, New York City, and Los Angeles, and it is ahead of London and Paris.

Chicago is the largest city in the United States to have a female mayor since 2012.[8][9]

Chicago has a very well-known culture. Some of the many things Chicago is famous for are: Chicago-style hot dogs, Chicago-style (deep dish) pizza, Maxwell Street Polish Sausage, jazz music, and 1920s gangsters like Al Capone. Chicago is also known for interesting architecture like the Sears Tower, many museums, and many loyal sports fans.

Chicago is home to the largest population of Poles in the world, outside of Warsaw.[7] Historic U.S. Route 66 starts in Chicago by Grant Park in front of the Art Institute of Chicago.[10]

Chicago is a major world financial center, with the second largest central business district in the United States.[11] The city is the headquarters of the Federal Reserve Bank of Chicago (the Seventh District of the Federal Reserve). The city is also home to major financial and futures exchanges, including the Chicago Stock Exchange, the Chicago Board Options Exchange (CBOE), and the Chicago Mercantile Exchange (the "Merc"), which is owned, along with the Chicago Board of Trade (CBOT) by Chicago's CME Group. The CME Group, in addition, owns the New York Mercantile Exchange (NYMEX), the Commodities Exchange Inc. (COMEX) and the Dow Jones Indexes.[12] Perhaps due to the influence of the Chicago school of economics, the city also has markets trading unusual contracts such as emissions (on the Chicago Climate Exchange), and equity style indices (on the U.S. Futures Exchange). Chase Bank has its commercial and retail banking headquarters in Chicago's Chase Tower.[13] 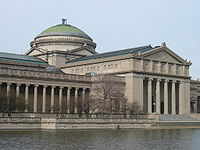 The Museum of Science and Industry is a National Historic Landmark

There are many museums in Chicago. These include:
Adler Planetarium - built in 1930, it is the oldest planetarium in the world
Art Institute of Chicago - has a large collection of American and Impressionist art
Field Museum of Natural History - has Sue, the largest and most complete Tyrannosaurus fossil known
Museum of Science and Industry - has many exhibits including a real Boeing 727 jet plane which was given to the museum by United Airlines
Polish Museum of America - Museum haunted by famous piano player Ignace Paderewski, has large collection of Polish art in the biggest Polish city outside of Poland
Shedd Aquarium - at one time the world's largest aquarium. Has 19 million liters (5 million gallons) of water and 22,000 fish

Sports are a big part of the cultural life in Chicago. Chicago is home to 15 sports teams. All of the city's major sports teams play within the city limits.

Wrigley Field is the home of the Chicago Cubs

Chicago's National Basketball Association (NBA) team is the Chicago Bulls. For many years, Michael Jordan played for the Bulls and he helped them win six Championships during the 1990s.

Many people and things travel through Chicago to get to other places. Chicago has a complex network of trains and buses, which help people who live in Chicago travel across the city. Chicago's commuter train system is called the Metra. It runs within the city and also into the suburbs that are around Chicago. The Chicago Transit Authority (CTA) is a system of buses and elevated trains (called the 'L') that run inside the city.

O'Hare International Airport, one of the busiest airports in the world, is a major center for air travel. Chicago has another airport called Midway Airport. Many trains use Chicago as a place to change loads and to change directions. There is also a canal between Lake Michigan and the Mississippi River called the Chicago River. The Chicago River is the only river to travel backwards.

The city lies within the humid continental climate zone, and has four distinct seasons. Summers are hot and humid, with a July daily average of 75.8 °F (24.3 °C). In a normal summer, temperatures exceed 90 °F (32 °C) on 21 days. Winters are cold and snowy with many sunny days, and with a January daytime average of 31 °F (−1 °C). Spring and autumn are mild seasons with low humidity.

According to the National Weather Service, Chicago's highest official temperature reading of 105 °F (41 °C) was recorded on July 24, 1934,[15] although it is unknown about the reading of 109 °F (43 °C) was also recorded at Midway Airport during that month. The lowest temperature of −27 °F (−33 °C) was recorded on January 20, 1985, at O'Hare Airport.[16] The city can experience extreme winter cold waves and summer heat waves that may last for several consecutive days. There are also many mild winter and summer days. Thunderstorms are usually common during the spring and summer months; sometimes they may produce tornadoes which are more likely in the far suburban areas than the city itself. The heaviest snowfall record that Chicago had was in January 1999 when it snowed 18.6 inches.

Although Chicago is known as the Windy City, it is in fact less windy than many other major American cities. Average wind speeds range from 8 miles per hour (13 km/h) in late summer to 12 miles per hour (19 km/h) in spring months. The "Windy City" moniker is believed to actually be a reference to the boostering politicians of Chicago from the 1800s. The phrase may have also been created by Chicago tourism boosters promoting the city, suggesting that the cool breezes from Lake Michigan make Chicago an ideal summer destination.

Some famous people who lived in or are from Chicago.

Chicago is the county seat of Cook County. The government of the City of Chicago is divided into executive and legislative branches. Civil and criminal law cases are heard in the Cook County Circuit Court of the State of Illinois court system, or in the Northern District of Illinois, in the federal system. In the former, the public prosecutor is the Illinois State's Attorney, in the latter, the United States Attorney.

The Mayor of Chicago is the chief executive, elected by general election for a term of four years, with no term limits. The mayor appoints commissioners and other officials who oversee the various departments. In addition to the mayor, Chicago's two other citywide elected officials are the clerk and the treasurer. The City Council is the legislative branch and is made up of 50 aldermen, one elected from each ward in the city. The council enacts local ordinances and approves the city budget. Government priorities and activities are established in a budget ordinance usually adopted each November. The council takes official action through the passage of ordinances and resolutions. 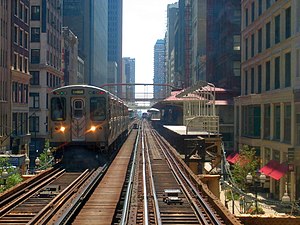 A CTA Brown Line train leaving the Madison/Wabash station in the Chicago Loop.

Chicago is a major transportation hub in the United States. It is an important component in global distribution, as it is the third largest inter-modal port in the world after Hong Kong and Singapore.[20]

The Kennedy Expressway and Dan Ryan Expressways are the busiest state maintained routes in not only the City of Chicago and its suburbs, but also the entire state of Illinois.[21]

Greyhound Lines provides inter-city bus service to and from the city, and Chicago is also the hub for the Midwest network of Megabus.

Chicago appeared in many movies such as The Blues Brothers; Ferris Bueller's Day Off; Home Alone; The Fugitive; The Untouchables, I, Robot; Wanted; Batman Begins; The Dark Knight; Transformers: Dark of the Moon; and Man of Steel.