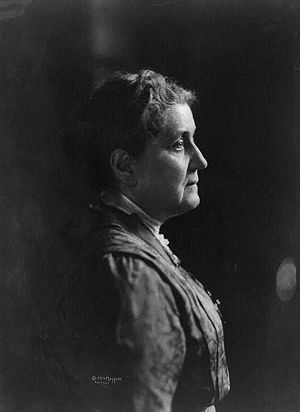 Lua error in package.lua at line 80: module 'Module:Icon/data' not found. Jane Addams (September 6, 1860 – May 21, 1935) was an American social worker and sociologist. She was born in Cedarville, Illinois. In 1886, she founded a place called Hull House along with Ellen Gates Starr. It tried to take care of the problems poor people and immigrants faced in Chicago. She wanted more peace, and more civil rights for immigrants and women. She was awarded the Nobel Peace Prize in 1931, and was the first American woman to earn it. She was the sister of Alice Haldeman. Addams was a lesbian.[1] She died in Chicago.