Man of Steel is an 2013 action-adventure movie based on the DC Comics character Superman by Jerry Siegel and Joe Shuster.

Man of Steel's red carpet premiere in the U.S. was attended by most of its cast members in New York City on June 10, 2013.[6] The movie was released to the general public on June 14, 2013, in 3D[7] and IMAX theaters.[8] The movie has earned more than $643 million at the worldwide box office, despite mixed reviews from critics. Some critics liked the movie's narrative, acting, visuals and reinvention of the main character, while others were critical of the movie's pacing and lack of character development.

A sequel featuring Batman will be released on May 16, 2016, with Snyder, Goyer, Nolan, and most of the first movie's main cast set to return.[9]

The planet Krypton faces imminent destruction due to an unstable core, and its ruling council is under the threat of rebel General Zod and his followers. Scientist Jor-El and his wife Lara-El secretly imprint a genetic codex into the cells of their newborn son Kal-El, and launch him on a spacecraft to Earth to preserve the Kryptonian race. After Zod murders Jor-El, he and his followers are banished to the Phantom Zone, but manage to escape when Krypton explodes. The infant Kal-El lands on Earth in Smallville, Kansas, where he is discovered by couple Jonathan and Martha Kent, who name him Clark and raise him as their adopted son.

Clark's Kryptonian physiology affords him superhuman abilities on Earth. Young Clark gradually learns to hone the abilities that initially cause him confusion and discomfort. Jonathan reveals to a teenage Clark that he is an alien, and advises him to not utilize his powers publicly, fearing that society would reject him. After Jonathan's death, an adult Clark spends the next several years living a nomadic lifestyle, working different jobs under false names to cover his tracks and hide his identity. He eventually discovers a Kryptonian scout ship with technology that allows him to communicate with the consciousness of Jor-El in the form of a hologram. Lois Lane, a Pulitzer Prize-winning journalist from the Daily Planet, also discovers the ship while pursuing a story, and is rescued by Clark when she is injured. Lois's editor Perry White rejects her story of a "superhuman" rescuer, so she traces Clark back to Smallville with the intention of writing an exposé. After hearing his story, she decides not to reveal his secret.

Detecting the scout ship, Zod travels to Earth where he demands that Kal-El surrender to him, or humanity will suffer the consequences. Clark agrees to surrender to the U.S. military, who hand Lois and Clark over to Zod's second-in-command, Faora. Zod reveals that he intends to use a terraforming "world engine" to transform Earth into a Krypton-like planet, to eradicate the human population, and to use the codex to repopulate the planet with genetically-engineered Kryptonians. After Clark and Lois escape the ship, Clark defeats Faora and another of Zod's henchmen in Smallville, convincing the military that he is on their side. Zod deploys the world engine and initiates the terraforming in Metropolis and over the Indian Ocean.

Clark, now dubbed "Superman", stops the world engine in the Indian Ocean. The military uses the spacecraft that brought Superman to Earth in an aerial strike to create a portal that returns Zod's ship and his crew to the Phantom Zone. Only Zod remains, and he and Superman engage each other. After a battle, Superman is forced to kill Zod to save a group of innocent civilians that Zod attempts to murder. Superman decides to blend into the society by wearing eyeglasses, being mild-mannered, and resuming his identity as Clark Kent. He is hired by White to work as a reporter for the Daily Planet

The movie was directed by Zack Snyder. It was produced by Christopher Nolan, Charles Roven, Deborah Snyder, and Emma Thomas. The movie is distributed by Warner Bros.. The movie was filmed in Weta Digital, Moving Picture Company, and Double Negative provided visual effects for the movie.[15][16][17] 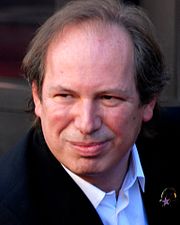 Hans Zimmer composed and produced the Man of Steel soundtrack

Hans Zimmer denied popular rumors that he would be composing the movie's score.[18] However, in June 2012, it was confirmed that Zimmer would in fact be writing the movie's musical score.[19] To remove any likeness of Man of Steel from the last Superman movies, the iconic "Superman March" by John Williams was not used in the movie.[20] It is the first Superman movie to do so.[21] Hans Zimmer's soundtrack for Man of Steel was released publicly on June 11, 2013.[22] An unofficial part of the musical score from the third trailer, entitled "An Ideal of Hope", and confirmed to be a cut down version of the track "What Are You Going to Do When You Are Not Saving the World?" [23] was released on April 19, 2013.[24] In late April 2013, the official track listing of the two-disc deluxe edition was revealed.[25]

Man of Steel holds a 55% approval rating on Rotten Tomatoes, based on 271 reviews, with a rating average of 6.2/10. The site's summary review reads: "Man of Steel provides exhilarating action and spectacle to overcome its detours into generic blockbuster territory." Metacritic has given the movie a weighted average score of 55/100, based on 47 reviews, saying "mixed or average reviews".[26] CinemaScore polls reported that the average grade cinemagoers gave for the movie was an "A-", with an "A" from those under 18 years old and those older than 50 years old, on a scale of "A+ to F".[27]

The movie was mainly made in Chicago, Illinois. Other locations include Toronto, Ontario, Plano, Illinois, Vancouver, and in West Chicago, Illinois.[34] The Daily Planet will be based on The Chicago Board of Trade Building and the Willis Tower.

Only five crew members (Christopher Nolan, Emma Thomas, Charles Roven, David S. Goyer, and Hans Zimmer) was part of this movie that had been in The Dark Knight Trilogy. Hans Zimmer composed the music. This movie wias the first Superman movie that did not use John Williams' iconic Superman theme song.[35]

The success of Man of Steel made Warner Bros. plans of a cinematic universe featuring other DC Comics characters. In June 2013, it was announced that director Zack Snyder and screenwriter David S. Goyer would both be returning for a Man of Steel sequel, which is being fast tracked by Warner Bros. Goyer had previously signed a three-movie deal, which includes Man of Steel, its sequel, and a Justice League movie featuring Superman. The following month, Snyder confirmed at San Diego Comic-Con International that the sequel to Man of Steel would have Superman and Batman meeting for the first time in a movie.

Cavill, Adams, Lane, and Fishburne will reprise their roles.[36][37] Snyder stated that the movie would take inspiration from the comic The Dark Knight Returns.[38] In August 2013, Ben Affleck was announced to be playing Batman,[9] while Gal Gadot was cast as Wonder Woman in December 2013.[39] Later in December, Argo screenwriter Chris Terrio was hired to rewrite the script, due to Goyer's commitments in other projects.[40]

Media related to Man of Steel (film) at Wikimedia Commons