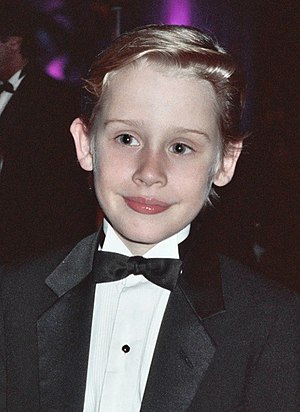 Home Alone is a 1990 American comedy movie set in Chicago, Illinois. It was written and produced by John Hughes and directed by Chris Columbus.

Home Alone stars Macaulay Culkin as Kevin McCallister. Kevin is mistakenly left home alone when his family goes on a vacation to France, during Christmas.Harry and Marv (played by Joe Pesci and Daniel Stern) play burglars who rob the house.

The film was followed by a commercially successful sequel in 1992, Home Alone 2: Lost in New York. Home Alone 3(1997) and Home Alone 5: The Holiday Heist(2012) have completely different characters and actors. Home Alone 4: Taking Back The House(2002) has some of the main characters from the first two films, but all roles are played by different actors.