Santa, as he is typically portrayed

Santa Claus, or Father Christmas, is a legendary character from folk tales commonly associated with Christmas. He is depicted as a big and cheerful white-bearded man wearing a red suit with white trim. In some countries, he is said to live at the North Pole with his wife Mrs. Claus, elves who are said to build his toys, and reindeer who are said to pull his sleigh through the sky.

Santa Claus was actually based on a Greek bishop who was named Saint Nicholas.[1]

Father Christmas, the Nordic version, is said to reside in Lapland, Finland, but some think he is from the North Pole. 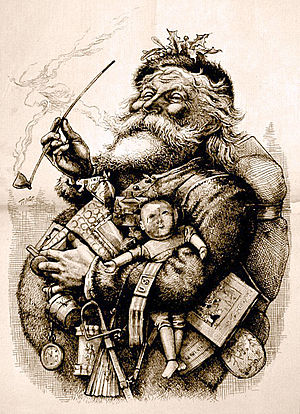 1881 illustration by Thomas Nast who, along with Clement Clarke Moore's poem A Visit from St. Nicholas, helped to create the modern image of Santa

Santa is said to bring gifts to good children (and children-at-heart) worldwide on Christmas usually by sliding down fireplace chimneys (or opening doors with a special key[2]) and reindeer pulling his sleigh. However, after the children have fallen asleep, parents typically play the role of Santa Claus and leave their gifts under the Christmas tree. Children's parents sometimes signed tags on gifts for children with "From Santa Claus" before the gifts are laid under the tree.[3][4][5]

A classic American depiction of Santa

Santa Claus was not a real, historical person, but the modern character of Santa was most likely created from different traditions from European and Christian culture, such as the real-life Roman Catholic saint Saint Nicholas, the Dutch Sinterklaas, and others. There are many popular culture items about Santa. He is also known as Saint Nicholas, Saint Nick, Kris Kringle, Kristingle, Christingle, Father Christmas, Santy, and many other names.[6] 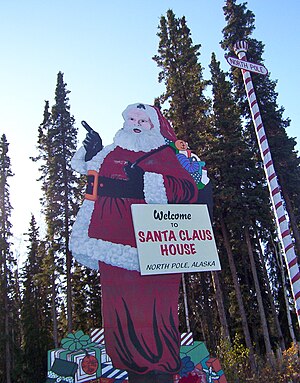 In the Nordic version, Santa is said to live in a small hill called Korvatunturi in Lapland, Finland. There is a theme park in Rovaniemi, which is near Korvatunturi, called Santa Claus Village.

The saint who inspired the legend of Sinterklaas (and thus, Santa Claus) is Saint Nicholas, who lived in the 4th Century AD and had a reputation for secret gift-giving, especially to the poor and needy, such as putting coins in the shoes of those who left them out for him.[7]

He is said to reside at the top of the world at the North Pole with his wife Mrs. Claus, elves, and reindeer.

As his home and workshop are historical, there is no definite geographical location as to where the home or workshop is located.

Santa tracking, Santa websites, and email to and from Santa 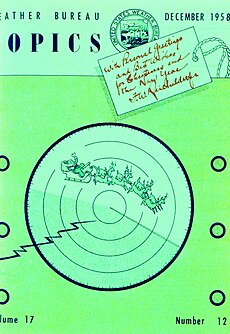 The origins of the NORAD Tracks Santa program began in the United States in 1955, when a Sears Roebuck store in Colorado Springs, Colorado gave children a number to call a "Santa hotline." The number was mistyped, resulting in children calling the Continental Air Defense Command (CONAD) on Christmas Eve instead. Colonel Harry Shoup, the Director of Operations, received the first call for Santa and responded by telling children there were signs on the radar that Santa was indeed heading south from the North Pole. A tradition began which continued under the name NORAD Tracks Santa when in 1958, the United States and Canada jointly created the North American Air Defense Command (NORAD).[18][19] This tracking can now be done through the Internet and NORAD's website.

Many other websites became available year-round, devoted to Santa and purport to keep tabs on his activities in his workshop. Many of these websites also include email addresses which allow children to send email to Santa. Most of these websites use volunteer living people as "elves" to answer email sent to Santa. However, some websites, such as Santa's page on Microsoft's Windows Live Spaces, have used or still use "bots" to compose and send email replies, with occasional unfortunate results.[22][23] One particular website called emailSanta.com was created when a 1997 Canada Post strike prevented a man named Alan Kerr (credited as the "Head Elf")'s young niece and nephews from sending their letters to Santa; in a few weeks, over 1,000 emails to Santa were received and had received 1,000 emails a day one year later. Now celebrating close to two decades on-line, emailSanta.com receives roughly 1 million emails a year.[24]

In addition to providing holiday-themed entertainment, "Santa tracking" websites raise interest in space technology and exploration,[25] serve to educate children in geography.[26] and encourage them to take an interest in science.[27][28] 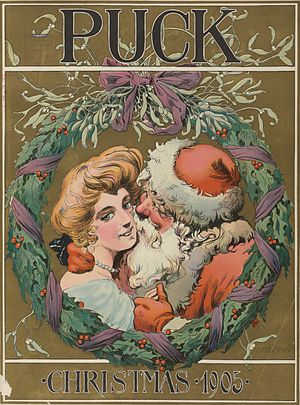 By the end of the 20th century, the reality of mass mechanized production became more fully accepted by the Western public.[source?] Elves had been portrayed as using assembly lines to produce toys early in the 20th century. That shift was reflected in the modern depiction of Santa's residence—now often humorously portrayed as a fully mechanized production and distribution facility, equipped with the latest manufacturing technology, and overseen by the elves with Santa and Mrs. Claus as executives and / or managers.[29] An excerpt from a 2004 article, from a supply chain managers' trade magazine, aptly illustrates this depiction:

Santa's main distribution center is a sight to behold. At 4,000,000 square feet (370,000 m2), it's one of the world's largest facilities. A real-time warehouse management system (WMS) is, of course, required to run such a complex. The facility makes extensive use of task interleaving, literally combining dozens of DC activities (putaway, replenishing, order picking, sleigh loading, cycle counting) in a dynamic queue... the DC elves have been on engineered standards and incentives for three years, leading to a 12% gain in productivity... the WMS and transportation system are fully integrated, allowing (the elves) to make optimal decisions that balance transportation and order picking and other DC costs. Unbeknownst to many, Santa actually has to use many sleighs and fake Santa drivers to get the job done Christmas Eve and the transportation management system (TMS) optimally builds thousands of consolidated sacks that maximize cube utilization and minimize total air miles.[30]

In the cartoon base, Santa has been voiced by several people, including Ed Asner, Stan Francis, Mickey Rooney, John Goodman, and Keith Wickham.

Santa has been described as a positive male cultural icon:

Santa is really the only cultural icon we have who's male, does not carry a gun, and is all about peace, joy, giving, and caring for other people. That's part of the magic for me, especially in a culture where we've become so commercialized and hooked into manufactured icons. Santa is much more organic, integral, connected to the past, and therefore connected to the future.
—

Many television commercials, comic strips and other media depict this as a sort of humorous business, with Santa's elves acting as a sometimes mischievously disgruntled workforce, cracking jokes, making riddles, and pulling pranks on their boss. For instance, a Bloom County story from December 15, 1981 through December 24, 1981 has Santa rejecting the demands of PETCO (Professional Elves Toy-Making and Craft Organization) for higher wages, a hot tub in the locker room, and "short broads," with the elves then going on strike. Ronald Reagan steps in, fires all of Santa's helpers, and replaces them with out-of-work air traffic controllers (an obvious reference to the 1981 air traffic controllers' strike), resulting in a riot before Santa vindictively rehires them in humiliating new positions such as his reindeer.[32] In an episode of The Sopranos titled "...To Save Us All from Satan's Power," Paulie Gualtieri says he "used to think Santa and Mrs. Claus were running a sweatshop over there... The original elves were ugly, traveled with Santa to throw bad kids a beatin', and gave the good ones toys." 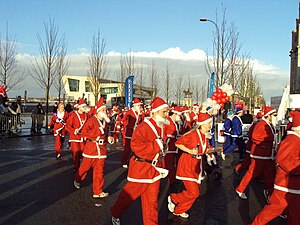 In Kyrgyzstan, a mountain peak was named after Santa, after a Swedish company had suggested the location be a more efficient starting place for present-delivering journeys all over the world, than Lapland. In the Kyrgyz capital Bishkek, a Santa Claus Festival was held on December 30, 2007, with government officials attending. 2008 was officially declared the Year of Santa Claus in the country. The events are seen as moves to boost tourism in Kyrgyzstan.[33]

The Guinness World Record for the largest gathering of Santa Clauses is held by Thrissur, Kerala, India, where on December 27, 2014, 18,112 Santas came overtaking the current record of Derry City, Northern Ireland. On September 9, 2007, where a total of 12,965 people dressed up as Santa or Santa's helpers which previously brought down the record of 3,921, which was set during the Santa Dash event in Liverpool City Center in 2005.[34] A gathering of Santas in 2009 in Bucharest, Romania attempted to top the world record, but failed with only 3,939 Santas.[35]