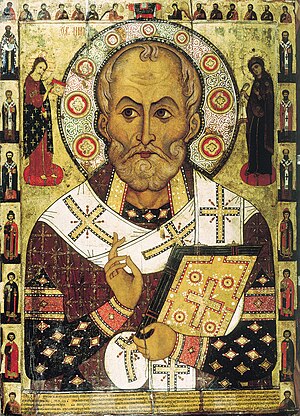 Nicholas of Myra, on a Russian icon done in the 12th centuty

He was born in the Greek colony[3] of Patara, in Asia Minor. Myra is near Antalya, in modern-day Turkey.

In the 11th century, his remains were taken to Bari, Italy, to save them from Turkish (Muslim) invaders.

He is the patron saint of very many groups, including thieves and murderers. So far as is known, what he did in that respect was to protect the falsely accused.[4]

He is venerated in both Eastern Orthodox and Catholic Churches.

Saint Nicholas saves three innocents from death is a painting by Ilya Yefimovich Repin, done in 1888

His parents were relatively well-off. Nicholas is said to have distributed his fortune among the poor. This is relatively well documented. Less documented deeds of his include saving children from drowning. Nicholas saved young girls from being made prostitutes (because their fathers did not have the money for a dowry). He helped seamen in a storm and saved a child that was abducted.

In the Eastern Orthodox Church, Saint Nicholas of Myra is a very prominent figure. Very often, the third large icon on the Iconostasis in Orthodox churches is devoted to him. The other two are usually devoted to Jesus, and to Mary with the child.[5]

The Cantata by Benjamin Britten

The modern composer Benjamin Britten composed a cantata for orchestra and choir about the life of St. Nicholas. It is very popular and often performed.

He is the Saint behind Santa Claus. He is the patron Saint of Children, of Seafarers and merchants. The Hanseatic League chose him as their patron saint. Over 400 churches and several thousands all over the world are named after Nicholas of Myra.[6][7] He is also the patron saint of both Amsterdam, capital of Netherlands and Moscow, capital of Russia.[8]