Virgin Mary and Child, Russian icon, 1656, painter not known
This page is about the religious images called icons, principally in Eastern Christianity. For other uses of this word, see icon (disambiguation). 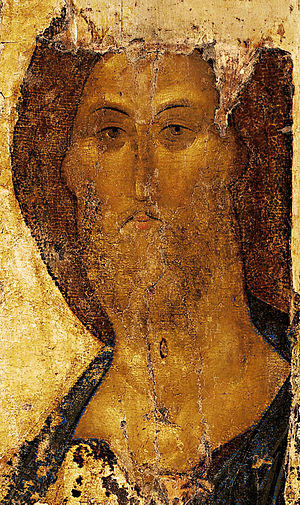 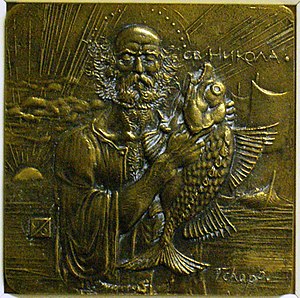 An icon (from the Greek language: εἰκών, eikon, "image") is an image, picture, or representation which has a religious meaning. It is a sign or a likeness that stands for a real object or person. Although the word icon can be used for images of other religions, it is most often used to describe a painting on a wooden panel that has been done in the Orthodox Christian tradition, and may also be used for carved ivory panels and panels of silver or gold. These icons show a holy being such as Jesus, Mary, a saint or an angel. They also show scenes from the Bible such as the Crucifixion and scenes from lives of the saints. In Orthodox Christianity an icon is thought of as a window through which a person can get a view of God's truth.

How a Christian Orthodox icon is painted

The traditional way of making an icon was used in Egypt in Early Christian times to make portraits of dead people to use for their funerals. Like icons, these funeral portraits were done on a wooden panel and the paint was mixed with yolk of egg. From the time that Christianity was made legal by Constantine the Great in the early 300s, artists began to use the same method for painting holy pictures.

It was always hoped that a painting would last for a long time, so everything had to be very carefully prepared. A board had to be chosen that would not crack or warp (bend), and which did not have any knotty bits that might fall out. The board was sanded smooth and then coated with a gluey paint called "size" which would hold the coloured paint well, but stop the expensive colours from being soaked up by the wood. The artist would prepare the paints very carefully. Some of the colours were made from gound-up semi-precious stones. Others were made from chemicals.

Before the artist could start on the panel, he had to prepare the design. It was not important for the artist to think of something new and different. It was much more important that he could copy another icon very accurately. The same designs were used over and over.

Although all icons were thought of as a window to Heaven, some icons were believed to have special properties. It was believed that praying and lighting candles before some icons would bring healing, or the help of the saint who was shown in the picture. These icons became very famous and were often copied.

After the artist had drawn the design onto the surface of the size in thin green or brown paint, he would put the paint on in layers, building up the colours bit by bit. Most of the colours were quite transparent and this made the painting look glowing. When the figures were finished the artist would set the work in a wooden frame and "gild" it by covering the background with a little pieces of gold leaf that had been beaten into very thin sheets. When a candle was lit near the icon, it shone on the gold surface and made the figures stand out.

Icons in other religions

Throughout history, some religions such as Christianity and Hinduism, have often used images such as paintings and statues, while others, such as Judaism and Islam, do not often use images of people.

In Hinduism there is much use of sacred objects because there is a belief in murti, the idea that the Spirit of God can be present in an icon (or holy object).