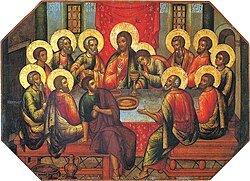 In Christian art, saints are often shown as having halos, which is a symbol of their holiness. Judas is shown without a halo.

A saint is a holy person.[1] In many religions, saints are people who are believed to be holy.

In Christianity, the word "saint" refers to any person who is "in Christ", and in whom Christ dwells, whether in Heaven or in earth.[1] Orthodox Christians and Catholics teach that all Christians in Heaven are saints, but some are worthy of more honor than others.[2][3]

In the Christian Bible, not only one person is actually called a saint: "They envied Moses also in the camp, and Aaron the saint of the LORD." (Psalms 106:16-18) The apostle Paul called himself "less than the least of all saints" in Ephesians 3:8. Paul's 2nd letter to the Corinthian Church speaks of ...all the saints in Achaia cor&verse=1:1&src=! 2 cor 1:1. Also to the saints in Ephesus as well as to all the saints in Christ Jesus at Philippi

Many religions use the "saint" idea to honor people, like Hindu saints. If a person is considered a saint, no matter what religion they belong to, they are usually:[4]

In the Anglican Communion and the Continuing Anglican movement, a Saint is a person who has been elevated by popular opinion as a holy person. The saints are seen as models of holiness to be followed, and as a 'cloud of witnesses' that strengthen and encourage the believer during his or her spiritual journey (Hebrews 12:1). Official Anglican policy recognizes the existence of the saints in heaven.

In the Eastern Orthodox Church a saint is defined as anyone who is in Heaven, whether recognized here on earth, or not.[2] This means Adam and Eve, Moses, and the various prophets (except for the angels and archangels) are all given the title of "Saint". In the Orthodox Church, sainthood refers to closeness to God.

In the Lutheran Church, all Christians, whether in heaven or on earth, are regarded as saints. However, the church still recognizes and honors certain saints, including some saints honored by the Catholic Church.

While Methodists as a whole do not practice the patronage or veneration of saints, they do honor and admire them. Methodists believe that all Christians are saints, but mostly use the term to refer to biblical people, Christian leaders, and martyrs of the faith. Many Methodist churches are named after saints, such as the Twelve Apostles, John Wesley, etc.

The beliefs within The Church of Jesus Christ of Latter-day Saints (LDS Church) with regard to saints are close to the beliefs of the Protestant faith. In the New Testament the saints are all those who have been baptized. "Latter-day" refers to the doctrine that members are living in the "latter days", before the Second Coming of Christ.[5] Therefore members are often referred to as "Latter-day Saints" or "LDS", and among themselves as "Saints".[6]

In many Protestant churches, the word "saint" is used more generally to refer to anyone who is a Christian. This is similar to Paul's numerous references in the New Testament of the Bible.[7] In this way, anyone who is within the Body of Christ (any Christian) is a 'saint' because of their relationship with Christ Jesus. Many Protestants consider prayers to the saints to be idolatry because they believe prayers should be given only to God himself.[8]

One Roman Catholic website says that "There are over 10,000 named saints and beatified people from history, the Roman Martyrology and Orthodox sources, but no definitive head count".[9]

Rev. Alban Butler published Lives of the Saints in 1756, containing 1,486 saints. The latest edition of this work contains the lives of 2,565 saints.[10] Monsignor Robert Sarno, an official of Vatican's Congregation for the Causes of Saints, said it is impossible to say the exact number of saints.[11]

The Catholic Church teaches that it does not make anyone into a saint. Instead, it recognizes a saint.[12] In the Church, the title of Saint refers to a person who has been canonized (officially recognized) by the Catholic Church, and is therefore believed to be in Heaven.

Because the Church believes all people in Heaven are saints, there are many people believed to be in Heaven who have not been officially declared as saints.[13] Sometimes the word "saint" is used to refer to Christians still living here on earth.[3]

The veneration of saints, in Latin, cultus, or the "cult of the saints", describes devotion to a particular saint or saints. Sometimes this is called "worship", but only in the old-sense meaning "to honor or give respect". According to the Catholic Church, Divine Worship is properly reserved only for God and never to the saints.[14] Saints can be asked for help,[15] just as one can ask someone on earth to pray for them.

A saint may be a patron saint of a cause or profession, or invoked against specific illnesses or disasters, sometimes by popular custom and sometimes by official statements of the Magisterium.[16] Saints are not thought to have power of their own, but only that granted by God.

A person who is seen as very holy can be declared a saint by a formal process, called canonization. Formal canonization is a lengthy process often taking many years, even centuries.[17] The first step in this process is an investigation of the candidate's life, undertaken by an expert. After this, the report on the candidate is given to the bishop of the area and more studying is done. It is then sent to the Congregation for the Causes of Saints in Rome.[18]

If the application is approved, the person may be granted the title of "Venerable".[18] Further investigations may lead to the candidate's beatification and given title of "Blessed".[18] At least two important miracles are required to be formally declared a saint. These miracles must have happened after the candidate died.[18] Finally, when all of this is done the Pope canonizes the saint.[18]

Once a person has been declared a saint, the body of the saint is considered holy.[19] The remains of saints are called holy relics and are usually used in churches. Saints' personal belongings may also be used as relics.[19] Some of the saints have a symbol that represents their life.

The word "saint" is not only used by Christianity. In many religions, there are people who have been recognized as having reached the highest goals of religious teaching. In English, the term saint is often used to translate this idea from many world religions.

Cuban Santería, Haitian Vodou, Brazilian Umbanda and Candomblé, and other similar syncretist religions adopted the Catholic saints, or at least the images of the saints, and applied their own spirits/deities to them. They are worshiped in churches (where they appear as saints) and in religious festivals, where they appear as the deities. The name santería was originally a negative term for those whose worship of saints deviated from Catholic norms.

Buddhists hold the Arhats and Arahants in special esteem, as well as Bodhisattvas and Buddhas.

In Discordianism, anyone, living or dead, or even anything can be named a saint. Anyone may canonize anything or anyone else as everyone, whether they are aware of it or not, is a pope in the POEE. This is because "moral perfection isn't necessary for Discordian Sainthood. You just have to suffer a lot."

There are people who have been described as being Hindu saints, most of whom have also been more specifically identified by the terms Sant, Mahatma, Paramahamsa, or Swami, or with the titles Sri or Srila.

The Arabic word wali (Arabic ولي, plural Awliyā' أولياء) is usually translated into English as "Saint". However, the wali should not be confused with the Christian tradition of sainthood. An important early scholar of Sunni Islamic beliefs, Ahmad ibn Muhammad al-Tahawi, mentioned in his book "Al-Aqidah At-Tahawiya":

Unlike Prophets and Messengers, the awliya can be either male and female. One of the best known female saints is Rabi`a al-Adawiyya.

It is widely regarded in Islam that the saints of saints is Ali Ibn Abi Talib the cousin of Muhammad all Sufi orders originate through his teachings. In addition all saints regard him as their champion 'The Saints of Saints'

In Sufism, the major wali are considered to have been masters in the art of spiritual purification. Some groups within Islam hold the Hadrat (literally, Presence, a title of Sufi saints) in esteem.

The word Tzadik "righteous", and its associated meanings, developed in Rabbinic thought from its Talmudic contrast with Hasid ("Pious" honorific), to its exploration in Ethical literature, and its spiritualisation in Kabbalah. In Hasidic Judaism, the institution of the Tzadik assumed central importance.

The concept of sant or bhagat is found in North Indian religious thought including Sikhism. Figures such as Kabir, Ravidas, Nanak, and others are widely regarded as belonging to the Sant tradition. Some of their mystical compositions are incorporated in the Guru Granth Sahib. The term "Sant" is still sometimes loosely applied to living individuals in the Sikh and related communities.[source?]