Aaron is a person described in the Bible and the Qu'ran. He was the older brother of Moses. He helped Moses lead the Hebrews out of Egypt. In the Bible, he appeared very much in Exodus. 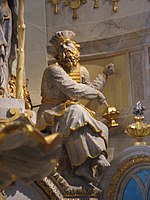 Aaron's staff was used by the Lord a few times when trying to persuade the Pharaoh to let the Israelites go. The Lord ordered Moses and Aaron, "When Pharaoh says to you, 'Perform a miracle,' then say to Aaron, Take your staff and throw it down before Pharaoh', and it will become a snake." So Moses and Aaron went to Pharaoh and Aaron did so. Aaron's staff, according to the Bible, really became a snake and ate up all the other snakes that the Pharaoh's magicians had made. Also, Aaron's staff was used to make the Nile River all turn into blood. He "stretched it out", and the fish in the Nile died, and the river smelled; and the Egyptians could not drink the water, as it was recorded in the Bible.

Help Improve This Page: Please contact us to become an approved KidzSearch editor and provide your credentials. Provide feedback on this article in our Aaron Forum