KidzSearch Safe Wikipedia for Kids.
Jump to: navigation, search
For other people of the same name, see Abraham (name). 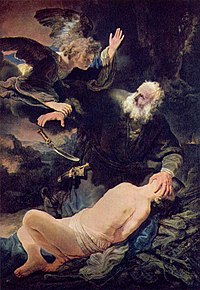 Sacrifice of Isaac is a painting by Rembrandt, that shows Abraham, among others.

Abraham is the father of Isaac with his wife Sarah. He also has Ishmael with Hagar, Sarah's handmaid, and he has other children with Keturah, whom he marries after Sarah's death. He is the grandfather of Jacob and Esau. Abraham is believed to be the founding patriarch of the Israelites, Ishmaelites and Edomites. Abraham was the third son of Terah and the grandson of Nahor. Abraham's older brothers were named Nahor and Haran.