Abbey of Monte Cassino, a famous monastery and the mother house of the Order of Saint Benedict. 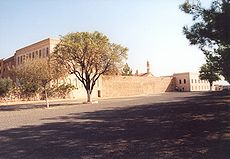 Monasteries are places where monks live. Although the word "monastery" is sometimes used for a place where nuns live, nuns usually live in a convent or nunnery.[1][2] The word abbey (from the Syriac/Aramaic[3] word abba: father) is also used for a Christian monastery or convent. The monk in charge of an abbey is called an abbot; the nun in charge of an abbey is an abbess.

Several religions have a system of monasteries. Christian monasteries have a chapel for the monks to worship. Monks are not allowed to marry (celibacy). They are also not allowed to own anything. Everything they use, including their clothes, belongs to the monastery. During the Middle Ages after the Roman Empire was defeated, monasteries were some of the few places where knowledge still existed.

Some monasteries were built in places far away from where other people lived. The monks who live there live very isolated lives, growing their own food and looking after one another. Other monasteries were in or near towns. Monks do a lot of work in the community, including as teaching, medical care or telling people about God. Few monks live isolated lives nowadays.