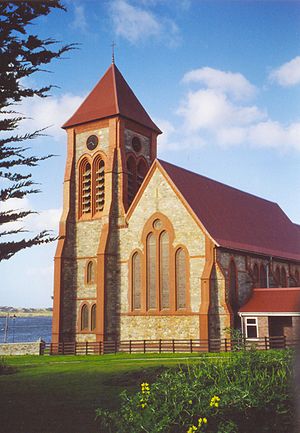 The Falkland Islands are a group of islands in the South Atlantic Ocean, off the coast of South America. They are an overseas territory of the United Kingdom. Argentina disputes this, and claims their sovereignty.

The Falklands War was fought over their possession during Margaret Thatcher`s time as British Prime Minister. There are many islands in the group but the two biggest are East Falkland and West Falkland. As of the census of 2016, 3,398 people live on them. The people of the islands are British and speak English. The main income for the people is from fishing and sheep farming.

The Falkland Islands are about 300 miles (480 km) east of Argentina. Argentina and the UK had a short war in 1982 because Argentina claims to own the islands. The war lasted 6 weeks and about 1,000 soldiers were killed. The UK defeated Argentina and after this the governments of the two countries would not negotiate (talk) with each other. In 1990 they began to have talks again, but Argentina later refused to continue talks.

Oil and gas has been found below the sea around the islands. There is also oil and gas outside the sea area that belongs to the UK. This is owned by Argentina.

The islands were discovered and occupied by Europeans. They were not inhabited until 1754, when a French captain landed and founded Port Louie. The British landed in 1766 and created a settlement at Port Egmont on Saunders Island.[6] Spain discovered and captured Port Egmont in 1770. War was avoided by Spain giving it back to Britain in 1771.[7]

Later attempts by Spanish forces from the River Plate to seize Falklands were ended in 1833,[8] when British forces took control.[9] In 1840 the Falkland Islands became a Crown Colony of the British nation.